Kupsky Stops 30 Shots in Net for SC in Losing Effort

Although the South Carolina Stingrays (9-5-4-0) erased an early deficit, the Florida Everblades (14-5-0-1) scored twice in the third period to take the lead back and earn a 4-2 decision at the North Charleston Coliseum on Wednesday night.

Forwards Graham Knott and Mark Cooper found the back of the net in the game for the Rays. Both goals came with assists by Brett Supinski and goaltender Jake Kupsky played well in the crease, stopping 30 Florida shots in a losing effort. 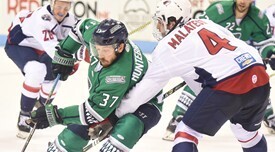 Florida scored goals in the opening minute of each of the first two periods to take control of the game. In the first, it was Michael Neville who struck 25 seconds in to make it 1-0, then Alex Kile beat Kupsky 46 seconds into the middle frame to extend the Everblades’ lead to 2-0.

South Carolina got back in the game when Knott scored his third goal of the season on the power play from Max Novak and Supinski at 12:47 of the second period. After Novak’s initial shot was blocked, Graham quickly scooped up the rebound and flicked it past goaltender Jake Hildebrand to get the Rays on the board and cut the score to 2-1.

Cooper evened the game up early in the third at 2-2, scoring his second of the season on a rebound in front of the Florida net at 1:15. Supinski took an initial shot and earned the first helper, while defender Blake Hillman was credited with the second assist, his first point as a Stingray.

But the Everblades got back in front just minutes later when Michael Huntebrinker scored an unassisted breakaway goal to make it 3-2 at 5:03 of the third.

Hugo Roy added an insurance tally for Florida on a 2-on-1 rush at 17:30, sealing the victory for the Everblades.

Despite outshooting Florida 15-8 in the third period, the Stingrays were outshot overall on the night by one, 34-33. Knott had the only power play strike of the game as SC finished 1-for-3 on the man-advantage and held Florida to an 0-for-1 mark. Hildebrand stopped 31 shots to pick up the win for the Everblades.

The two teams will meet again to continue their 3-game series on Friday night at the North Charleston Coliseum at 7:05 p.m. The series will wrap up on Saturday at 6:05 for Military Appreciation Night.