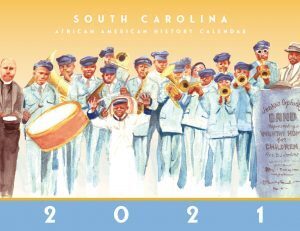 On Friday, The South Carolina Department of Education, South Carolina ETV (SCETV), and the University of South Carolina’s Cventer for Civil Rights History and Research announced the release of standards based African American history content to classrooms across the state.

“These lessons and resources are not just reserved for the celebration of Black History Month, but should be used by educators throughout the year to highlight the important contributions of African Americans in our state and nation,” said State Superintendent of Education Molly Spearman.

“As South Carolina’s public media network, SCETV is proud to serve as the state’s primary storyteller — a role that gives us opportunities to work on projects like the African American History Calendar,” said SCETV President and CEO Anthony Padgett. “We are honored to once again be involved in such an important community and educational initiative, shining a spotlight on individuals who have made a real, lasting impact on their communities and the state.”

The 2021 lesson plans, activities, and videos encourage teachers to engage their students in a deep dive discussion of the honorees. Each month’s activity coincides with the month’s honoree and focuses on the historical impacts they have made on society and to South Carolina. The lesson activities support students meeting the Profile of the South Carolina Graduate through inquiry based learning as well as assists school districts in ensuring African American history and the culture and experiences of African Americans, is integrated into the existing K-12 social studies curriculum.

The 2021 African American History Calendar features the Jenkins Institute, located in Charleston, on its cover. The Jenkins Institute, founded in 1891, was formerly known as the “Jenkins Orphanage.” What started as a simple act of kindness from a husband and wife taking in four orphans would eventually turn into a musical empire that has inspired some of the country’s most famous African American talents.

The honorees featured in the 2021 calendar are:

Allie Brooks, a native of Florence, South Carolina, served more than 35 years as a teacher, principal, and superintendent of schools in the Pee Dee.

Gilda Cobb-Hunter, a native of Gifford, Florida, became the first African American woman in Orangeburg County elected to be a member of the South Carolina House of Representatives.

Rosa Franklin, a native of Cordesville, South Carolina, was the first African American woman to serve in the Washington State Senate.

Sherman James, a native of Hartsville, South Carolina, was the first African American to be elected president of the Society for Epidemiologic Research, the largest professional society of epidemiologists in North America.

Willis and Clara Langley, natives of Washington, North Carolina, were the first African American couple to purchase a McDonald’s restaurant in the city of Columbia.

L. Casey Manning, Sr., a native of Dillon, South Carolina, was the first African American scholarship recipient to play basketball at the University of South Carolina.

Nathan Spells, Sr., a native of Bowman, South Carolina, is the CEO and founder of Construction Dynamics, Inc., one of the Southeast’s leading minority-owned and operated General Contracting and Construction Management firms.

A.J. Whittenberg, a native of Fork Shoals, South Carolina, served as president of the Greenville NAACP and was instrumental in the desegregation of schools in Greenville. An elementary school was named in his honor in 2001.

Click here to view the 2021 calendar and lesson activities.

Follow us
Related Topics:SCETVSouth Carolina Department of EducationUniversity of South Carolina's Cventer for Civil Rights History and Research
Up Next