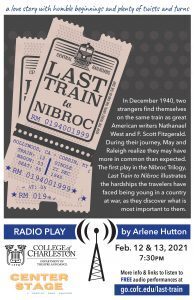 On February 12th and 13th, the College of Charleston Department of Theatre and Dance will present “Last Train to Nibroc,” penned in the late 1990s by American playwright Arlene Hutton. This audio-only radio play is produced in partnership between CofC Stages and Center Stage, a student-run theatre group at the College.

Co-directed by adjunct faculty member Paul Rolfes and theatre student Holden Crumpler, “Last Train to Nibroc” is the first story in the Nibroc Trilogy — following the lives of a young couple in 1940s wartime and into the 1950s, throughout the trilogy. Holden describes the play as “a love story with humble beginnings and plenty of twists and turns.”

In December 1940, strangers May and Raleigh find themselves on the same train as the great American writers Nathanael West and F. Scott Fitzgerald. During the journey, the young travelers from seemingly different backgrounds and experiences, tease and fight with each other, yet realize they may have more in common than they expected. Touching on and connecting the characters’ aspirations, personal failures, and love, Hutton kicks off the Nibroc Trilogy with this funny, touching portrait of two people searching for happiness.

Theatre students Zoe Sauder and Mason Monti play the roles of May and Raleigh, respectively, in the College’s production.

“I think the heart of the play is about resilience and courage….that through many of life’s obstacles these two young people continue to find their way back to one another,” remarks Rolfes, a College of Charleston theatre alumnus and core ensemble member of PURE Theatre.

The simply staged romance played to critical acclaim at the Edinburgh Festival Fringe and Off-Broadway, and also earned glowing reviews from Washington Post, The New York Times, and BackStage, among other notable publications.

The live audio performances of “Last Train to Nibroc” will take place on Feb. 12-13, 2021 at 7:30 p.m. Admission is free and the show will be presented as an audio-only radio play.

Links to listen to the performance online are posted at go.cofc.edu/last-train.

Root of Soul: J19th Fest to be Held in June at the Exchange Park