Goaltender Jake Kupsky earned his first ECHL shutout with 20 saves to lead the South Carolina Stingrays (9-3-3-0) over the Greenville Swamp Rabbits (6-4-5-2) by a final score of 2-0 on Wednesday night at the North Charleston Coliseum. 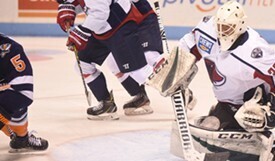 Forward Tim Harrison and defender Jesse Lees scored their first goals of the season in the victory for South Carolina, as the Rays earned their third win of the 2020-21 season over Greenville.

The first 40 minutes were without any tallies, as both teams provided excellent protection in front of their respective goaltenders. Both clubs had chances on the power play in the second and third periods, but neither team could find a strike to add to the score sheet on the man-advantage.

Harrison broke the ice and at 6:35 of the third period, giving the Stingrays a 1-0 lead with the tally that wound up as the game-winner. Rookie forward Jade Miller recorded his first professional point with the primary assist on the goal, while blueliner Tariq Hammond tacked on his fourth helper of the season.

SC would find the back of the net a second time just 5:07 later when Lees netted his first of the season with a highlight real move to beat Greenville’s Ryan Bednard at 11:42 of the third, giving the Stingrays a late insurance goal that lifted their lead to 2-0. The Calgary, Alberta native did the job all on his own, carrying the puck coast-to-coast for an unassisted snipe.

Bednard totaled 21 saves on 23 shots in a losing effort, as South Carolina finished with a 23-20 shots-on-goal advantage over Greenville.

The two teams meet again for their eighth meeting of the season on Thursday night at the Bon Secours Wellness Arena for a 7:05 p.m. puck drop.

The Rays will wrap up this week’s 3-in-3 at home for Health and Wellness night at the North Charleston Coliseum on Friday when they take on the Jacksonville Icemen, also at 7:05. The doors will open at 6:05 Friday evening, and the first 1,500 fans in attendance will receive a Stingrays sweat towel!

2021 Volvo Car Open To Be Conducted Without Fans