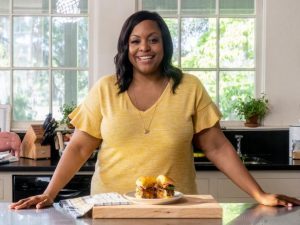 Food Network announced that Charleston native Kardea Brown will be a judge on the upcoming seventh season of Spring Baking Championship. The season premieres on the network and the new Discovery+ streaming platform on Monday, February 22nd at 9 pm.

Brown, a prominent personality on Food Network, is the host of Delicious Miss Brown and has appeared on Beat Bobby Flay, Chopped Junior, Cooks vs. Cons, Family Food Showdown, and Farmhouse Rules.

On this season of Spring Baking Championship, host Ali Khan returns to present 11 competitors from across the country with spring-themed baking challenges for a chance to take home the $25,000 grand prize and a spot in Food Network Magazine. But in order to win this competition the bakers must show off their superb baking skills each episode over two rounds, including a pre-heat test which gives a baker an advantage during the main heat. Through 10 episodes the competitors must prove they can create and elevate tasty springtime desserts to impress judges Kardea Brown, Nancy Fuller, and Duff Goldman to make it to the finale and kick off their spring in the sweetest way.

2021 Volvo Car Open To Be Conducted Without Fans