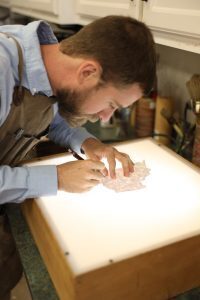 The Charleston Library Society will soon be sending out its “Conservation Wish List” says James Davis (right), Director of the Bindery/Rare Book Conservator.

The list comprises treasures from the library’s vault that have been evaluated as essential enough to the Society’s collection to merit restoration. These volumes have also been assessed by Davis, an expert conservator, to determine that their physical condition makes them good candidates for conservation and restoration.

The “Conservation Wish List” offers Library Society members and the community the opportunity to adopt a particular volume or volumes and help fund restoration. A recent adoption undertaken by a family foundation involved the repair and preservation of three 18th Century volumes of the Atlantic Neptune, consisting of the earliest maps commissioned by the British of the North Atlantic seacoast.

Davis is interested in having those potentially interested in adopting a work understand what is involved in the process of conservation and restoration. “If you were committed to adopting an item from the list, I’d take you on a tour. I’d show you a volume or set of volumes and explain the restoration process.”

In response to a visitor’s interest, this description might get into the nitty gritty of how mold damage might be addressed along with what glue and leather is used to rebind age-damaged works, Davis says. “Another staff member might explain the work’s historical importance.” 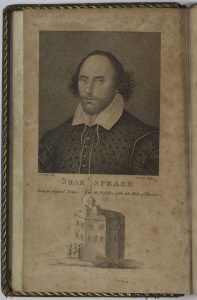 What’s currently on the vault list? A sneak peek reveals that prices for adoption range from $800 to $50,000. Davis explains that the Library Society has developed a reputation as a Shakespeare center and among the items in need of repair is a 2nd edition of Shakespeare’s works. While not having the “creme de la creme” cachet of a first edition set, it is still very valuable.  The adoption cost is $800.

Among other items on the “Conservation Wish List” are records maintained since the founding of this circulating library in 1748. What were Charleston patrons checking out and reading over the decades is as interesting to the casual literary buff as it is to the social historian. Other manuscripts also appear on this list, including those relating to trials held in Charleston for charges of piracy.

Davis is aware that some potential adopters may be interested in supporting a project on a subject not included on the list.  Not a problem.  With the Library Society’s extraordinarily large and wide-ranging collection, it’s very likely the potential donor’s interests can be well matched with a Library Society volume or set of volumes in need of expert care. 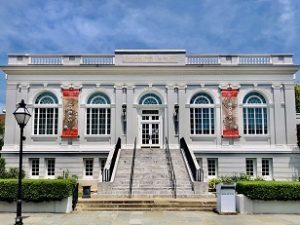 Follow us
Related Topics:charleston library societyJames Davis
Up Next