ORLANDO, Fla. – The Orlando Solar Bears (8-6-1-0) took an early lead and held the South Carolina Stingrays (8-3-3-0) off the board until the final frame on their way to a 4-1 decision on Sunday afternoon at the Amway Center.

SC defenseman Paul Meyer scored the lone tally of the day for the Rays, his first professional goal. Goaltender Jake Kupsky had a busy night in the crease, stopping 39 shots in a losing effort. 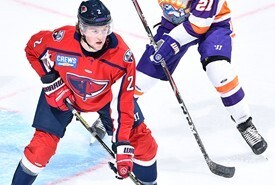 Orlando’s Mark Auk netted his first of the season to give the Solar Bears an initial 1-0 lead at 6:38 of the first period. The Rays had one power play opportunity in the opening period and were unable to capitalize, going into the first intermission trailing by a goal.

The Solar Bears extended their lead to 2-0 at 7:47 of the second period on a wrap-around goal by Jerry D’Amigo. Orlando then added another tally off a deflection from Zack Andrusiak with only 30 seconds remaining in the second period to make it 3-0. The Stingrays held true on the penalty kill, eliminating four chances for Orlando on the man-advantage in the first two periods.

In the third, Orlando would add another goal to extend their advantage to 4-0 over SC. Aaron Luchuk padded the lead with the Solar Bears’ fourth goal, their first on the power play, just 34 seconds into the third.

The Stingrays responded with Meyer’s goal at 8:56 of the third to get themselves on the scoreboard. The rookie was appearing in his third game of the weekend for the team after joining the club just before they departed on their weekend trip to the Sunshine State. Meyer had previously been on a contract with the Solar Bears, appearing in two games.

Goaltender Garret Sparks picked up the win for the Solar Bears, making 26 saves. Orlando outshot SC 43-27 in the game and converted on one of seven power play opportunities while holding the Stingrays to an 0-for-2 mark on the man-advantage.

South Carolina heads back home to face Greenville on Wednesday night at the North Charleston Coliseum at 7:05 p.m. The contest represents their first of two home games in three days and their second consecutive week with a 3-in-3 series. The Stingrays then travel to Greenville for a Thursday evening matchup, before returning home to face the Jacksonville Icemen on Friday at 7:05.