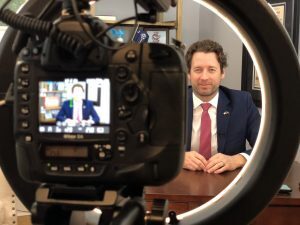 One day after teasing a “big announcement,” former Congressman Joe Cunningham on Monday announced that he had launched his own podcast series called Joint Resolution.


According to the show description on Spotify, the Cunningham will bring “together the biggest names in politics over a beer to tackle the most important issues facing our country today.” Cunningham and is guests will attempt to “figure out why our country has become so divided and what we can do to fix it.”

The debut episode features Rep. Abigail Spanberger (D-VA) and former Rep. Denver Riggleman (R-VA). New episodes will be released semi-monthly. Spanberger made news in the aftermath of the election for criticizing the Democratic Party’s strategy in the 2020 elections, while Riggleman was defeated in 2020 after his officiation of a same-sex wedding upset Republicans in his district.

You can learn more about the podcast and listen to the first episode here.


In November, Cunningham lost his seat to Republican challenger Nancy Mace. As for the speculation around the podcast announcement, Cunningham emphasized his commitment to serving South Carolina.

“My service to South Carolina is just getting started and I will be sharing my plans for 2022 very soon,” he said. “In the meantime, I hope this podcast gets people thinking about how best to come together and tackle the challenges facing our state and nation.”

After traveling the state and hearing from so many of you, I have an announcement to make.