ESTERO, Fla. – A dominating performance led the South Carolina Stingrays (8-1-3-0) to a 5-1 win over the Florida Everblades (11-5-0-0) at Hertz Arena on Friday night in the first matchup between the two longtime rivals. 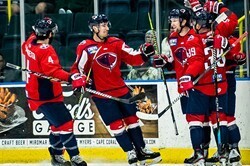 Four Stingrays skaters had multi-point efforts in the victory, while goaltender Jake Kupsky turned aside 25 shots to earn a win in his first game for South Carolina. Forwards Brett Supinski, Cole Ully and Dan DeSalvo each had a goal and an assist, while Max Novak picked up a pair of helpers.

Supinski got SC on the board at 6:40 of the first, marking just the second time this season that Florida has allowed the opening goal. The tally was set up by Mark Cooper, who skated through both Everblades’ defenders before setting up the Collegeville, Penn. native for his second strike of the year to make it 1-0.

The Rays extended their advantage to 2-0 just 1:24 later in the frame when Ully netted his fifth of the season in front of the net off a feed from Novak. DeSalvo picked up a second assist on the strike, which came at 8:04 of the opening frame.

Florida cut the SC lead down to one at 14:01 of the first when Alex Kile scored the only goal of the night for the Everblades and the Rays took a 2-1 lead into the first intermission.

DeSalvo pushed the advantage back to two goals in the final moments of the middle frame, scoring his second goal of the year on a shorthanded breakaway at 19:36 of the second period to make it 3-1.

South Carolina then tacked on two power play goals in the third, opening up the score. First, defender Max Gottlieb buried a shot from the point at 3:44 from Ully and Supinski, before forward Graham Knott put an exclamation point on the win with his first goal as a Stingray from Novak and Darien Craighead at 14:27. Knott’s strike finished off a perfect passing play that started up high with Novak sending the puck down to Craighead who then moved it to Knott on the doorstep for the finish.

The Stingrays outshot Florida 27-26 in the contest and had the only man-advantage tallies of the game, going 2-for-5 on the power play while holding the Everblades to an 0-for-4 mark. Florida goaltender Devin Cooley stopped 22 shots for his team in the loss.

South Carolina is back at Hertz Arena for another battle with the Everblades on Saturday night at 7 p.m. The Rays return home to face Greenville on Wednesday night at the North Charleston Coliseum at 7:05 p.m.