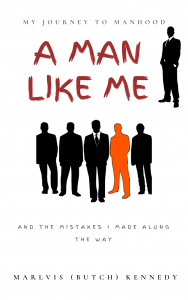 Local author Marlvis “Butch” Kennedy, who is also the founder of REAL MAD (Real Men against Domestic Violence), recently released his newest book, A Man like Me: My Journey to Manhood…And the Mistakes I Made Along the Way.

To combat that assertion, Kennedy’s recently released book “chronicles his life’s journey, how he learned of the strength and courage that women possess, and how he became an advocate to reduce violence against them.”

You can order his book here.