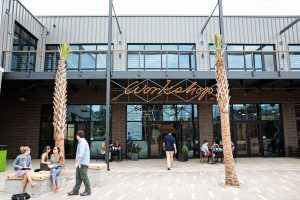 After two years of planning, and four years in business, Michael Shemtov today announced that Workshop, the exploratory food court on the Pacific Box & Crate property in downtown Charleston, will close late this spring. The revolving, multi-stall food court has hosted upwards of thirty different concepts in 48 months, with ten expected to have opened their own brick and mortar by the end of this year.

The food hall model was one that had found much success in other areas of the country. San Francisco’s famous Ferry Building, Chelsea Market in New York City, and Ponce City Market in Atlanta are a few examples.

“Unfortunately, we overestimated how many people would seek this experience in Charleston, and underestimated the energy needed to find or develop new concepts,” Shemtov said. “Despite early stumbles, Workshop found its footing by mid 2019, and was on track for double digit growth in 2020. In fact, if you visited us on a Saturday you’d think there’s no way we’d be closing our doors. However, behind the crowds was a business that took a great deal of effort, and funds, to keep going.”

“I am tremendously proud of what the Butcher & Bee team and these food entrepreneurs have accomplished over the past four years,” Shemtov said. “We brought a wonderful diversity of food to Charleston, including several best-in-class concepts. We helped ten concepts launch to brick and mortar and just as importantly, helped many others realize that the restaurant industry, or day to day operations, are not for them. We created a pathway for people long on passion but short on cash to test their ideas and fortitude, and the result is a culinary landscape in Charleston that has been changed for the better.”

Workshop hasn’t released a firm date for the closure and they expect to operate for several months, so there is time for more visits to one of the six current concepts: Sino Tacos, Ma’am Saab, South Philly Steaks, Blazing Star Cafe, Saha Jordan, and Sushi-Wa. Sushi-Wa is expected to continue to operate in the “cube” until they transition into their own brick and mortar. Shemtov does not rule out bringing one more concept on for the final stretch.

Workshop as a concept may be closing but the space is expected to be transformed to welcome a single concept.

“People will be no stranger to what comes next. In fact, the next chapter feels like a natural evolution and we’re looking forward to sharing those details soon,” Shemtov said.

Archer Called up to Trinidad and Tobago National Team