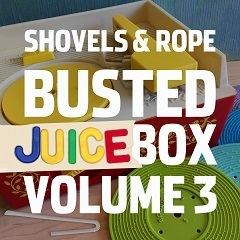 Local band Shovels & Rope surprised fans today when they announced that they have a new album set to be released on February 5th and dropped a new single (listen below). The new record is already available for pre-order.


Busted Jukebox Volume 3, the third installment of the band’s collaborative record series, will feature classic songs covered by the Charleston duo with some of their closest musical friends.The album includes appearances from Sharon Van Etten, M. Ward, The Secret Sisters, John Paul White, The War and Treaty, and more.

This time around, Shovels & Rope has nicknamed the album “Busted Juicebox” because of its kid-friendly song choices. The artists put their signature on songs ranging from classic lullabies to R.E.M., and from Janis Joplin to Annie.

You can listen to one of the tracks, “In My Room” (feat. Sharon Van Etten), below. Click here to purchase the new album.


Here’s a look at the album’s full track listing:

The Citadel Unveils Bastin Hall, a New Way to do Business

The Beach Company Announces New Headquarters at The Jasper