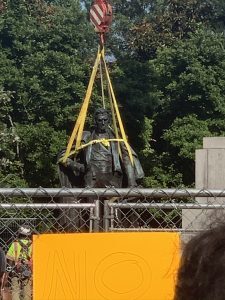 Seven months after the John C. Calhoun statue was removed from its pedestal high above Marion Square, the City of Charleston believes they have found the time capsule that was said to be left in the monument’s base.

The announcement was made on Saturday afternoon during an impromptu press conference near the monument’s former location. Mayor John Tecklenburg and archaeologist Eric Poplin said the capsule will not be opened this weekend, but instead will be moved to a secure location that can properly handle the delicate task of opening the capsule. The capsule was described as being a granite box that appears to be covered in marble.

No one knows for sure what’s inside the capsule, but a 1934 article in the Post & Courier (at the time it was called The Charleston News and Courier) claims the following will be found: “a cannonball recovered from the harbor which was supposed to have been used in the battle of Fort Moultrie; a case containing a banner which was carried by seamen in Calhoun’s funeral procession, the banner bearing the words ‘The children of old ocean mourn him’; $100 in Continental money; a lock of Calhoun’s hair; Calhoun’s last speech; and various lists of national and state officers and organization members.”

Back in June, the Charleston City Council voted unanimously to remove the monument from Marion Square in downtown Charleston. Calls to remove the statue of the former U.S. Vice President, white supremacist, and slavery advocate had increased after the death of George Floyd at the hands of police officers in Minnesota.

The monument’s dismantling began on June 24th, but it took crews about 17 hours to finally detach the statue from its nearly 100-foot tall base and lower it to the ground. The process of removing the statue hit several snags along the way, including a hydraulic issue with one of the two lifts being used by the workers. The crew also had to bring in a diamond band saw to cut through layers of concrete, granite, epoxy, and metal.

The statue was then moved to an undisclosed location where it still awaits a new home (the Charleston Museum Board in July voted against accepting the statue). Crews then began the process of slowly removing the monument’s base. The dismantling had to be done slowly due to the suspected existence of the time capsule.

What Your Rooms Say About You