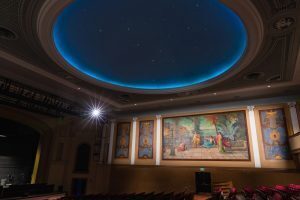 For 67 years, the Preservation Society of Charleston has been awarding the prestigious Carolopolis Interior Award which recognizes excellences in interior preservation of historic, publicly accessible buildings in Charleston. The round Carolopolis plaque’s presence on a facade means the building has been restored and rehabilitated under the society’s highest standards of excellence.

Starting today, the College of Charleston Sottile Theatre can proudly display that plaque.

The Preservation Society awarded the designation to the Sottile Theatre during the Carolopolis Awards Ceremony held on Thursday, Jan. 21, 2021, at the Sottile Theatre. The award follows a recent yearlong renovation of the theater that began with a modernization of the stage house and, fortunately, afforded the time for the award-winning restoration/preservation of the theater’s two original large-scale wall murals and the illuminated dome, as well as repairs to the decorative plasterwork surrounding the dome.

Known as the Gloria Theater when it opened at 331 King Street in 1927, the theater showcased vaudeville performances, touring shows and movies. Built by Albert Sottile’s Pastime Amusement Company, the Gloria was designed as a smaller version of the great movie palaces of the era, and was lauded for the grandeur of its architecture and design. Originally fitted with nearly 2,000 seats, the Gloria was the largest of its kind in South Carolina. After almost 50 years, the Gloria Theater closed its doors for good in 1975.

Soon after the theater shut down, the building was purchased by the College of Charleston. After various renovation projects, the theater opened again in February 1990 under the new name of Sottile Theatre.

The Sottile Theatre now plays a vital role as a performance and event venue for the College and the community. The 785-seat theater hosts regional and international operas, plays, ballets and concerts – including Spoleto Festival USA events – as well as student performances, movie nights, comedians and speakers.