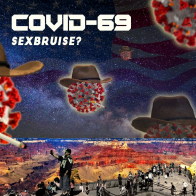 Local band Sexbruise? is set to release their latest album, a five -song EP called COVID-69, on January 29th. The satirical pop band always provides the best quotes (even if they aren’t technically true), so instead of a drab, traditional announcement post, I think it’s far better if I let the band’s press release speak for itself:

Sexbruise? has returned, just as the world needed them most, with a new EP that has rendered critics literally speechless.

The 5-song EP was written by the band during the Coronavirus lockdown and contains many subtle references to the pandemic and current affairs. For example, the album title, COVID-69, is thought to be a cryptic reference to the COVID-19, which was the name of a very popular virus in 2020. Also, if you look closely at the album art (above right), you will notice that the floating cigarette-cowboy-asteroids are actually cleverly disguised viruses. The band has not confirmed, however, if these allusions are actually references to the current pandemic.

“We want people to draw their own conclusions about the subject matter of the EP,” said a representative on behalf of the band.

However, with song titles like “‘Rona” and “We Don’t Have the Virus,” and lyrics like “We’re gonna pray this virus away in the USA,” one cannot help but wonder. Subtlety and symbolism have always been one of Sexbruise?’s many, many strong points.

In “Guided Meditation,” Sexbruise? welcomes the listener to a guided meditation session set to relaxing spa music: “Today’s purpose is to find peace…especially to help ourselves not think about the virus.” The song builds into an epic synth-fueled guitar jam and concludes with a message of affirmation.

“Physical,” the EP’s most radio-friendly hit, chronicles a love affair between a patient and a doctor. Will they find life-long romance? Listen and find out!

“‘Rona” is a re-release that takes us back to the beginning of the pandemic, when everyone kept sending each other pictures of that naked Black guy with the giant dick. This reggaeton sing-along is a real toe-tapper!

“We Don’t have the Virus” is a synthy dance tune in which Sexbruise? brags about not having the virus, but laments the strangeness of the times in which they are living. Scholars have noted that this may be another veiled reference to the coronavirus pandemic of 2020. This single will be released along with a music video, directed and produced by Seemless Pictures (Kyle Perrit and Barret Burlage).

“In The USA” is a patriotic song about trucks in the mud, drinking beer, stacking dollar bills, and the virus. This is a must-listen for Sexbruise? fans and strangers alike.

Sexbruise? Is encouraging fans to stream the album on repeat to help them get precious internet coins to buy candy.

The album will be available on all streaming platforms January 29th, as long as nothing else horrible happens before then. January of 2021 will historically be known as “The month when Sexbruise? released COVID-69 and nothing else interesting happened.”

Sexbruise? is also embarking on an exciting business opportunity wherein they recruit their fans to sell diet pills. Fans are encouraged to recruit as many friends as possible to become ‘team members’ and boast that the pills are “100% effective and will fix all of your problems.” 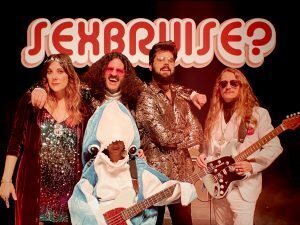 Sexbruise? is a satirical pop band from Charleston that combines elements of improvisation, electronic music, poppy hooks, and audience participation to create an unforgettable live experience. Despite their extreme wealth and lavish lifestyle, Sexbruise? grew up on a dirt road right down the street from Pappy’s Hardware Shop, and subsequently is very in tune with the struggles and plight of middle America.

In spite of starting out as a “fake” band, Sexbruise? developed a cult-like fanbase immediately following their first show in 2015, amassing thousands of social media followers seemingly overnight. With only three shows under their belt, Sexbruise? was named Electronic/Experimental Act of the Year by Charleston City Paper, an award they would win again in 2018.

Sexbruise? has been featured at Rooster Walk Music and Arts Festival and will perform at FloydFest 2021 and other pending festies, assuming this damn virus doesn’t fuck us at the last second again.

Sexbruise?’s shows can be described as a giant party. The tunes are memorable, the stage presence exciting, and the antics unpredictable. And there are snacks. Thrown from the stage. The band has prepared pancakes and pizza on stage, brought out dancers in animal costumes, hired fake demonstrators to protest their shows, and many more other cool things.”