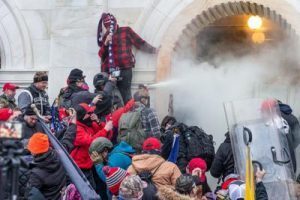 God willing we will have a new President and administration tomorrow, but it has been far from a peaceful or admirable transition.

The insurrection against the US Government last week (right) was not an isolated event and didn’t occur in a vacuum. For years, many Republicans – most recently led by Donald Trump – have encouraged the fringes of their party to move into delusional lies, where the inevitable end result was violence.

So what happens when it comes home to roost?

Charleston knows the evil pain of racist terrorism. It wasn’t long ago that a man walked into a black church and murdered 9 people for their skin color. We learned then (if we didn’t know it before) that racism and violence aren’t things that happen “out there” in the world, but right here in Charleston. Even more recently, the “Proud Boys” were harassing people in downtown Charleston and spewed their hatred of non-whites, women, and liberals from the steps of City Hall.

The Charleston Republican Party, talk radio, and local elected Republicans encouraged people to go to Washington, D.C. last week, knowing violence was a real possibility. People went and rioted inside and outside the US Capitol building, which as we know resulted in death, destruction, and chaos. Then they returned to Charleston, full of hate and adrenaline. What do we think would happen next?

The Charleston Democratic office was vandalized and the SC Statehouse is closed through Inauguration Week because of fears over another domestic terrorist attack.

It’s the result of what happens when West Ashley voters elect Republican Lin Bennett to the SC House despite her public support for the terrorist organization QAnon.

It’s the result of Republican’s like Sandy Senn and Nancy Mace spending hundreds of thousands of dollars running absurd TV ads stoking racial fears about riots coming to the suburbs of Charleston.

It’s the result of a Charleston County Republican Party meeting where, when one Republican suggested they denounce the murder of a Federal Law Enforcement officer, there were calls for him to be locked up.

Make no mistake about it. Over the coming months we will find that Charleston is home to multiple people who attacked our democracy on January 6th. The real question is, will we do anything about it? Or will they continue to be accepted in town, honored as speakers at Republican club events, and eventually voted into political office?

Calling out national activities and politicians is a vital and necessary first step. However, just as important and equally as pressing is for us to start calling out our local neighbors and Republican activists for their increasingly violent and radical views. It will take many acts of courage to do this, as our social lives and businesses are put at risk by holding our neighbors accountable. But our democracy depends on it.

Quirk-Garvan is the former Chair of the Charleston County Democratic Party. He lives in North Charleston with his wife and daughter and runs a socially responsible investment group. Learn more at www.bradyqg.com or @bradyqg (Twitter)