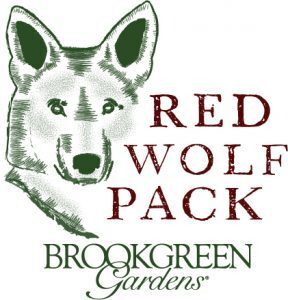 Brookgreen Gardens, the leading conservator of South Carolina’s indigenous animals, has received a $25,000 donation from First Citizens Bank to benefit its Red Wolf Campaign. Launched in 2020, the $250,000 Red Wolf campaign will fund a new four-acre habitat in Brookgreen’s Lowcountry Zoo which will house two pairs of breeding wolves in cooperation with the Red Wolf Species Survival Plan, a program designed to oversee the population management of the endangered Red Wolf species in captivity and enhance their conservation in the wild.

“Brookgreen Gardens has an incredible opportunity to be part of the crucial effort to help protect the most endangered wolf species in the world, the beautiful Red Wolf,” says Page Kiniry, President and CEO of Brookgreen Gardens. “We are grateful to First Citizens for its generous contribution to our mission to help conserve the Red Wolf and other endangered animals of South Carolina’s Lowcountry.”

“First Citizens Bank is proud to contribute to the Red Wolf Campaign and grateful to serve as a community partner while Brookgreen takes on such an important endeavor,” says Will Howard, market executive at First Citizens Bank. “We are excited to follow the project as it brings the hope of restoration to one of the most endangered canids in the world whose natural habitat is right here in the Carolinas.”

Brookgreen’s Lowcountry Zoo, one of only five institutions accredited by the Association of Zoos and Aquariums (AZA) in South Carolina, allows guests to learn about animals that are native to the Lowcountry, including species seen in the wild. All the native animals in the Lowcountry Zoo were either bred and raised in captivity or have sustained a major disability due to injury. In either case, these animals cannot survive in the wild.

To donate to the campaign, and become a member of Brookgreen’s Red Wolf Pack, visit this website.