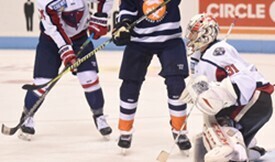 For the fifth time this season, the South Carolina Stingrays (7-1-3-0) and Greenville Swamp Rabbits (4-3-3-2) needed extra time to find a winner. And just like they did on Dec. 26, the Stingrays prevailed in a shootout, stopping all three Greenville attempts to pick up a 4-3 win on Saturday night at the North Charleston Coliseum.

SC forwards Darien Craighead (1g, 1a) and Justin Florek (2a) each had multi-point nights in the victory, while goaltender Alex Dubeau stopped 27 saves to pick up the winning decision.

Craighead got things going with his third goal in as many games, tipping home a pass from Florek in front of the Greenville net on the power play to make it 1-0 South Carolina at 16:35 of the first. Defender Max Gottlieb was credited with the second assist on the play.

The Swamp Rabbits responded with two power play tallies of their own in the second to take the lead, 2-1. First, Liam Pecararo evened the score just 25 seconds into the middle frame, before Matt Wedman struck at 8:32 of the period.

With 1:59 remaining in the second stanza, the Rays capitalized on another man-advantage chance. Craighead sent a cross-ice feed to Jesse Lees on the right circle, who then quickly tossed the puck down to the left side of the net where Askew swept it past goaltender John Lethemon for his second tally in as many nights. The goal equalized the game at 2-2 as things headed into the third period.

Defender Jordan Klimek broke through with his first goal of the year at 13:32 of the third, staying with a bouncing puck as he drove to the goal and pushed it into the back of the net to make it 3-2 Rays. Assists on the strike went to Florek as well as forward Frédéric Létourneau, who earned his first pro point on the play.

After a slew of penalties late in the third, Greenville got back in the game with 2:01 to play when Matt Bradley scored on a 2-on-1 rush to tie things up at 3-3.

Neither team was able to score in the 7-minute overtime and the game headed to a shootout. Forward Mason Morelli was the lone skater to convert in the skill session, and the Stingrays secured the extra point in the standings. Dubeau stopped all three Swamp Rabbit attempts to help SC secure the victory.

South Carolina outshot Greenville 45-30 in the game, including a 17-10 shots-on-goal advantage in the third period. Lethemon turned aside 41 shots for the Swamp Rabbits in a losing effort, while both clubs finished 2-for-5 on the man-advantage.