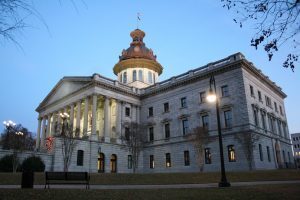 This week, the South Carolina Legislature will start their 2021 session. After a wild and tumultuous 2020, there are any number of important issues to tackle: distributing the COVID vaccine, helping small businesses, making sure unemployment is solvent, raising teacher pay, ensuring we stop closing rural hospitals, repairing and replacing our crumbling roads, protecting our natural environment as we deal with massive population growth, preparing for hurricanes and rising sea levels, and other potential disasters.

But of course – this is South Carolina, after all – those priorities will be thrown aside to appease radical fundamentalists within the Republican Party.

Despite a pandemic that has killed thousands of South Carolinians, the Republican legislature is bringing up an unconstitutional ban on abortion as the very first measure.

Seriously. To the thousands of dead citizens and the hundreds of thousands of unemployed South Carolinians, Republican leaders in the House and Senate have decided to spit on your pleas for help.

Let’s be clear. I’m pro-choice. I believe that intimate medical decisions are best left to a woman and her doctor. I believe that the government probing women at their most emotional and vulnerable moment is both morally wrong and an awful public health decision. However, even if I didn’t think that, this would still be a stupid bill.

Republican leaders will get up and yell and scream about why this bill is so important but ignores the law. You see federal law says that abortions are legal and in America, the federal law trumps what the state legislature of South Carolina may want to do.

So, what will happen with a bill like this? It might pass this year and if it does the State of South Carolina will get sued, Attorney General Allen Wilson will spend thousands of your tax dollars to go on TV and defend it while he tries out new zingers for his next political race, and then the law will get struck down as unconstitutional.

In past years this bill hasn’t ever passed because Democrats were able to filibuster it and stop the bill in the Senate. Unfortunately, after losing seats in November it’s unlikely they will be able to stop it again this year.

So, when you complain about the potholes in the road, when your family has to rack up debt because the unemployment system isn’t working, when your kid’s teacher quits because they can make more money and have less stress working at a fast food joint, when you are burying a loved one who died from COVID, just remember that all of those things are less important to Republicans in the legislature than passing an unconstitutional bill that won’t have any real impact once it’s overturned, just so they can raise more money for their campaign coffers and run for higher office.

Quirk-Garvan is the former Chair of the Charleston County Democratic Party. He lives in North Charleston with his wife and daughter and runs a socially responsible investment group. Learn more at www.bradyqg.com or @bradyqg (Twitter)

Commentary: All Politics is Local – Including Extremists and Violence