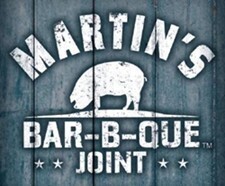 Although they may not be new (two years old in May 2021), many locals including myself are just discovering the awesomeness of Martin’s Bar-B-Que Joint on James Island. When you drop in their eatery at 1622 Highland Ave (basically Folly Road), two of your senses (smell & sight) will immediately be taken to a delightful level.

The distinct aroma of smoked meats wafts thru the air, tantalizing the taste buds, with their walls covered in iconic memorabilia that will take you on a nostalgic trip, recalling the golden era of entertainment from the 1950’s to the 1980’s. Amid the even older license plates are movie posters, LP record album jacket covers, and photos celebrating pop, rock, and country music icons.

Not to be overshadowed, Martin’s Bar-B-Que Joint pays tribute to Americana veterans such as Coca Cola, as well as local businesses and sports teams. If you’re a history buff or just love to salute yesteryear, the surroundings at Martin’s will easily set the mood for an incredible barbecue dining experience.

Owned and operated by Chase and Hannah Barton, and a few local silent investors, Martin’s is best described as an amazing barbecue joint serving up a variety of smoked meats, that accompany a plethora of sides one might enjoy at a family picnic or church potluck dinner. Ten side items that go well with either succulent smoked pork, brisket, turkey, or spare ribs. My mouth is watering just writing about it.

You can get a sandwich with one side, or a tray with two, or if you’re really hungry order up the Kid Brother (6 oz. pork & 6 oz. brisket) or Big Brother Sampler (spare ribs and brisket), complete with two sides. Bringing the spouse and a couple of young’ens with you, than get both and feed the whole family. You’ll get ample sides, enough to satisfy any hunger level, and quite frankly a meal unto themselves.

Traditional and familiar sides including home-made broccoli salad, baked beans made with pulled pork, red skin potato salad, and everyone’s favorite Mac & Cheese topped with their special cornbread and dixie rub concoction. They can share the secret Mac & Cheese recipe with you if you vow to become a monk, and never talk about it. Just kidding, like Dr. Pepper and KFC, some secrets are best kept unknown. Just file the Mac & Cheese under ‘freakin’ awesome’.

A popular dinner or lunch item that is flying off the menu board is there Redneck Taco. Not meant for the pinky finger out afternoon tea crowd. Basically it’s a cornbread hoecake aka a cornbread flapjack, underneath a heaping pile of pulled pork, their special blend of coleslaw, seasoned with Jack’s Creek Sauce (another cherished secret formula, yet mighty tasty). If you’re a true blue redneck or love Duck Dynasty, than this taco stack is for you. An ample portion with one side will set you back $11.49. Very affordable.

Sadly vegans have little options at Martin’s aside from a House Salad, or the Country and Farmer’s Salads minus the chicken or turkey. Maybe go for their Green Beans. Your choice. Martin’s Barbecue Joint doesn’t make any excuses for what they serve up. They are a smoked meat house catering to carnivores. AMEN!

Looking for something to awaken the senses or just warm you on a cold day, maybe try one of their two signature soups. The Brunswick Stew is a well seasoned melange of meats and veggies, and can serve as a meal, as does the Smoked Brisket Chili (you read that right BRISKET). While traditional chili is prepared with ground beef, Martin’s is not traditional, substituting brisket as the base meat allowing for a more distinct taste. Topped with shredded cheddar cheese and slices of pickled jalapeño peppers, it will excite the palate.

The 12 and under crowd, which Martin’s calls Lil’ Rascals will no doubt love the three select options resembling many low country children’s menus. What kid ever turns down Grilled Cheese, Chicken Fingers, or a BBQ Slider (chicken or pork). All easy on the wallet, with the trio all under $5.

For adults, sandwiches with side are around $10, with trays with two sides around $15. The Southern Paddy Melt or a Cheeseburger will set you back $11. And yes they proudly serve up Coke products.

More than 90 percent of the menu items are made in house. Smoked meats may be king at Martin’s, but any of their five namesake sauces are the royal complement. There is the mustard based Palmetto Gold, a tomato laced Sweet Dixie, Jack’s Creek Sauce, and the fiery Devil’s Nectar. Want a smooth pop in your mouth sauce that has that certain twang, than you want the mayo & cider vinegar based Alabama White Sauce. Ideal for dipping and or dunking any poultry order.

While the interior dining room reflects a welcoming atmosphere, with nostalgia covered walls, and three big screen TVs, including one at a cozy bar, the outside dining area resembles an open air courtyard. With a more sizeable bar (recognizing vintage pro wrestling), surrounding the inner enclosed patio, and five TVs, there is adequate seating among the picnic tables, bar stools, bus seats, stadium seating, and the lone captain’s chair. Unique to say the least! 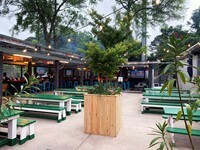 At the backside of the restaurant adjacent to overflow parking is the nucleus of Martin’s Bar-B-Que Joint. There you’ll discover a room with oversized smokers, with another room set aside to smoke whole pigs. Their meat scientists calculate just the right amount of smoked meats needed tomorrow. Hannah likes to say they are proud when they run out of some of the smoked meats just prior to closing, knowing there is no waste.

Let me break it down for you. When the day is near done, the master meat preparers at Martin’s are busy loading pork shoulder and brisket into smokers, allowing them to roast overnight (no less than 14 hours), thus allowing for fresh fall off the bone beef and pork, that literally melts in your mouth the very next day. Martin’s have it down to a science, so don’t expect any left over smoked meats from yesterday to show up on your plate. ‘It wouldn’t be prudent’.

With Chase being more hands on (kitchen & catering), according to Hannah who is the ‘Jane of All Trades’, Martin’s is simply a ‘come as you are eatery’. Drop in after church, have a business luncheon, come dressed in shorts and flipflops, or come clad in your favorite sports attire to watch a game. Bring the kids, bring grandma, or have your first date there (everyone loves BBQ). Currently open 11-9pm Tues-Sun, and until 10pm on Fri-Sat.

While there are several Martin’s Bar-B-Que Joints scattered over the southeast, the James Island location is homegrown, and well networked in the community. The Barton’s and their associates enjoy giving back. They have partnered with Tri-County Family Ministries, and their Feed The Need program. It is just one of the few programs Martin’s on James Island participates in, helping feed the community. That’s a fulfilling and satisfying food ministry.

Like that well known chain, there are no rules at Martin’s Bar-B-Que Joint, except you have a shirt, pants, and shoes. The biggest thing you can bring with you is an insatiable appetite for, smoked meats, good food and smiling faces. They serve up your standard domestic beers alongside low country favorites from Munkle, Low Tide, and Commonhouse.