The South Carolina Stingrays (6-1-2-0) brought their brooms to Home Improvement Night and completed a sweep of the Wheeling Nailers (2-5-3-0) with a 6-3 win on Saturday night at the North Charleston Coliseum.

Caleb Herbert led the way offensively with a 4-point night, scoring a goal and three assists, while Dylan Steman netted two goals and both Mason Morelli and Cole Ully each had a goal and an assist. 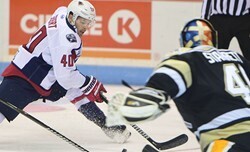 SC took the initial lead in the opening minute of the game when forward Darien Craighead scored his first professional goal from Justin Florek and Zach Malatesta. Florek led a rush into the offensive end and found Craighead to his right, who picked out the top right corner of the net and beat goaltender Shane Starrett with a perfect shot to give the Rays a 1-0 lead 56 seconds in.

Wheeling responded quickly, tying the game on a goal by Matt Alfaro at 4:15 of the first before taking the lead on a strike from Patrick Watling at 8:18 that made it 2-1.

The Rays evened the game back up at 2-2 before the end of the frame when Morelli found the back of the net for his fourth goal of the year from Herbert at 15:53.

Then South Carolina took control of the game in the second, scoring twice to re-take the lead going into the third. First, Ully scored his fourth of the season on the power play from Dan DeSalvo and Max Gottlieb at 13:26, before Herbert tapped in a pass on the doorstep that came from Novak at 16:19 to make it 4-2. Ully secured the second assist on Herbert’s tally for his fifth helper and team-leading ninth point of the season.

In the third, Steman extended the lead to 5-2 with a power play strike just 1:38 into the final frame. An initial shot from Herbert was stopped by Starrett, but Steman immediately put the rebound home. A second assist on the play was credited to Malatesta.

The Nailers got back within two when Cody Sylvester scored at 13:00 of the third, but Steman ended any chance of a comeback when he scored his second tally of the night into an empty net while SC was on the power play with 1:10 remaining. Morelli and Herbert each picked up helpers in the Rays’ sixth goal of the contest.

South Carolina outshot Wheeling 33-31 in the game and Starrett finished with 25 saves in a losing effort for the Nailers. The Stingrays power play broke through for three goals on nine man-advantage opportunities, while the team’s penalty kill was a perfect 6-for-6 on the night.

Next week the Stingrays welcome the Greenville Swamp Rabbits back to the North Charleston Coliseum for a two-game series beginning with Wizard Night on Friday at 7:05 p.m. The two teams will also play in North Charleston on Saturday on Youth Sports Night at 6:05.

CofC Pull Out 61-60 Win Over Drexel In Nail Biter