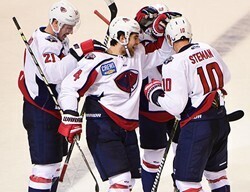 After getting behind 2-0 in the second period, the South Carolina Stingrays (5-1-2-0) scored four straight to defeat the Wheeling Nailers (2-4-3-0) by a final score of 4-2 on Friday night at the North Charleston Coliseum.

Four Rays skaters had multi-point nights in the victory, as Dan DeSalvo, Andrew Cherniwchan, Zach Malatesta and Mason Morelli each had a goal and an assist. Goaltender Alex Dubeau got the start and made 25 saves for South Carolina to earn his second win of the season.

In all three periods, the Rays totaled 16 shots, finishing with a season-high 48 shots on goal while holding Wheeling to 27.

The Stingrays had a 16-8 edge in shots on goal during the first period, but neither team was able to break the ice and get on the board in the opening frame.

Wheeling took the lead in the second when Sean Josling scored to make it 1-0 at 4:23. The Nailers then added to their lead with a shorthanded strike by Lawton Courtnall at 8:46 of the middle period.

Less than a minute after allowing the second goal of the game during a 4-on-4 situation, Malatesta hit DeSalvo with a pass up the right wall that set the forward free on a breakaway. DeSalvo then beat goaltender Brandon Halverson with a low shot for his first goal of the season and cut the deficit to 2-1 at 9:42 of the middle frame.

Cherniwchan evened the game at 1:40 of the final frame with his third goal of the year from forwards Justin Florek and Mason Morelli, tying the score at 2-2.

With under four minutes remaining in regulation, DeSalvo set up Malatesta for a one-timer that he didn’t miss, blasting the puck past Halverson to give SC their first lead of the game at 15:47. The second assist on the play was credited to forward Dylan Steman.

Morelli sealed the win for the Stingrays with an empty-net goal from Cherniwchan at 19:32 of the third.

South Carolina held Wheeling quiet on the power play in the game, going 4-for-4 on the penalty kill. But the Rays were also unable to score on the man-advantage, finishing 0-for-6. Halverson turned aside 44 shots for the Nailers in a losing effort.

The two teams face-off once again on Saturday night for Home Improvement Night at the North Charleston Coliseum presented by IBEW Local 776. The first 1,500 fans at the game, which is scheduled for 6:05 p.m., will receive a Stingrays mini tape measure.