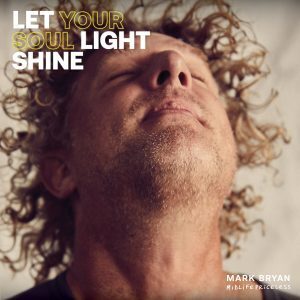 
“This song is a call to lead with whatever spiritual divinity exists in that humble, husk of skin we call ourselves,” Bryan said. “Right before I turned 40, I was suddenly divorced, and facing an extended hiatus from the band I had been in since I was 18. It was a sobering experience, and I realized I had to figure out who I was beyond the roles of husband, and guitar player; to which I had vested so much of my identity. It was midlife crisis, and it was bigger than me”

“I sobered up for a while, went to church, met with therapists, journaled and read extensively. I came out of it with a strong realization that our purpose here is to serve, humbly, with whatever gifts the universe has so graciously bestowed upon each of us. I also learned that you will never find true joy through another person. The secret is to find it in yourself, and then you have something to share. I tried to dig deep in this song, to share what I had been through, in the hope that it might either help someone before it’s too late, or at least know that they aren’t alone if they’re going through it. The only option is midlife priceless.”

You can listen to “Let Your Soul Light Shine,” and watch an interview with Bryan about the song, below.

Midlife Priceless is set to be released on April 2nd, 2021. The record’s first single, “Wanna Feel Something,” was released in November 2020.

Bryan is one of the founding members of Hootie & the Blowfish, the multi-platinum selling, two-time Grammy-winning band that formed at the University of South Carolina in 1986. His last solo record, Songs of the Fortnight, came out in 2016.

The musician also founded Carolina Studios in 2001. The local nonprofit offers an after school music recording and technology program that helps children (ages 8–18) thrive in music and the arts.

You can stay up-to-date on Bryan’s album news on www.markbryanmusic.com.
–

College of Charleston Announces Updates for the Spring 2021 Semester