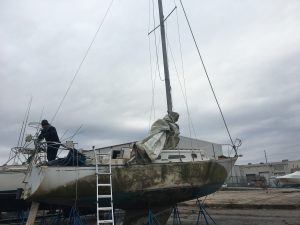 Looking out on South Carolina’s distinctive tidal marshes, it’s easy to lose yourself in the beauty of the scene. Environmentalists like Whit Jones, see beyond the poetry of snowy white egrets, hauls of shrimp coming in on the shrimp boats, and abundant crops of oysters. They recognize the urgent need for clean up needed to ensure that the extraordinary environment lasts.

The environmental non-profit group Wounded Nature – Working Veterans joins military Veterans with concerned civilians. They are all committed to locating, identifying, and removing (or containing) the sources of toxins and pollutants beneath the surface of the water. And, devote their time and energy to protection, prevention, and advocacy.

Trained as a US Army helicopter pilot, Jones recently retired after 28 years of active duty service. By chance two years ago, just after he bought his first boat, he met Rudy Socha, the founder of Wounded Nature. Socha, a Marine Corps Veteran, immediately recruited his new acquaintance to the organization. Jones now serves as Director.

“I’m not afraid of hard work and getting muddy,” Jones said.

Above all, Wounded Nature focuses on the hard to reach areas. The more accessible areas along the coast are handled by others, he says. The Wounded Nature team owns two boats and is assisted by many other individuals, community groups, and volunteers 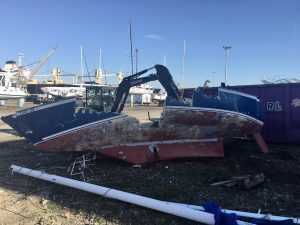 Among many different types of efforts to address environmental problems in the marshlands, the group’s efforts to remove abandoned boats from these areas dramatically demonstrate the complexities involved.

“This is not picking up plastic wrappers and cigarette butts on the beaches,” Jones explains.

Many boats are abandoned because owners find them too expensive to maintain. They realize the cost of hauling them out of the water and dispensing the remains is not affordable, and they risk being slapped on the wrist for violating current rules about abandoning boats.

Deteriorating fiberglass, corroded wiring, sewage, and toxins seeping into the sea from fuel and batteries are among the reasons Jones and other Wounded Nature members and partners are committed to reversing pollution that is harmful to animal and fish life and passed on to humans.

Now in early January, Jones and his team are demolishing two 23-foot sailboats that were recently hauled out of the marshes onto dry land at the Cooper River Boatyard. The multi-stage process involves dropping the big, heavy mast – which can be as tall as 50 feet – removing the keel, breaking up the rest of the boat with machinery or power tools, and taking it to a landfill out of county since Charleston County no longer has room.

In this effort, as in others, Wounded Nature counts on the generosity of expert partners (see list below) in completing the process. They have extracted and disposed of 83 derelict and abandoned boats over the past two years. Clearing a small power boat can cost $3,000-$5,000.

“When boats have been submerged for a long time, the project may involve divers and the use of a crane,” Jones said. “Costs to complete the project may mount to $40,000 or more.” 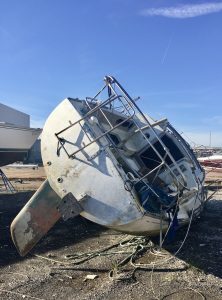 Jones says Wounded Nature would like to get away from managing extraction and demolition of derelict and abandoned boats by educating the public about all the time and money needed to correct the damage caused by human negligence. Also key to change, he says, is to support changes (also endorsed by insurance companies) in state laws to impose stricter enforcement and defined timelines for removal of derelict or abandoned boats.

“Most of these areas can only be reached by boat and include rural beaches, tidal marshes, and high tide line collection points,” Jones said. “Our work results in reducing the deaths of sea turtles, dolphins, sharks and marine life. Cleaning these wildlife habitats results in increased recreational and commercial seafood production including clams, oysters, shrimp and fish.”

Mark your calendars and plan on attending the major Wounded Nature event scheduled for March 13th when team leaders install a huge oyster bed in the area around Drum Island in the Charleston Harbor and cleanup of the tidal marsh on Daniel Island.

With a special thanks to

Charleston Fire Department for their on water assistance

Website: South Carolina Among States With the Worst Drivers