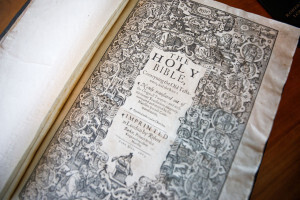 With the Igoe Library Foundation’s recent gift to Special Collections, the College of Charleston community is invited to explore one of the most important works in all of English literature: the King James Bible, printed in 1613.

Special Collections faculty are accustomed to handling treasures; many materials housed on the third floor of the Marlene and Nathan Addlestone Library count among the world’s rarest. The 400-year-old Bible gave them pause nonetheless.

Beautifully bound in calfskin with cotton pages as thick as dollar bills, the book represents the undertaking to standardize in English the Old and New Testaments. With its ornate engravings and calligraphic lettering, the book is at once a magisterial example of print craftsmanship and the basis for one of the most familiar versions of Christian holy writ.

The importance of the 1613 Bible is not limited to those of faith. Common English phrases – “A man after his own heart,” “Fell by the wayside,” “Let there be light” and many more – are traced back to these initial printings, making the Bible a boon to scholars of literature and linguistics.

The life of the original owner, Harold E. “Skipper” Igoe Jr., rivals in variety the materials themselves. A native Charlestonian and philanthropic fixture in the city, Igoe’s career ranged from harbor pilot to stockbroker to farmer, with much in between. As comfortable wielding a chainsaw to cut a road to his Maine house as researching rare books in Europe, Igoe’s talents were matched only by his perennial curiosity.

It was Igoe’s love of Shakespeare and Elizabethan England that drew him to materials from the British Isles. By being made publicly available via CofC’s Special Collections, his joy from these printings will live on in their use by students and faculty.

“We won’t have to say, ‘hush’ or silence people when we show them these gems,” says Harlan Greene, scholar-in-residence, who had the privilege of working with the family and seeing the items in the magnificent room Igoe had built for them. “When students and researchers realize what they have in front of them, they fall silent, as the realization and awe of the object overwhelms them. There is majesty in their makeup, and an aura of their travel down through time that accompanies them. The human history of the hands that have held these items will now continue for generations, thanks to the collector whose passion brought them here.”

The Igoe Library Foundation’s gift represents the fundamental mission of the College Libraries and Special Collections in action. These materials would have been a cherished addition to even the largest academic library – and now, instead of being scattered halfway around the world or hidden in private repositories, they are available to be enjoyed by every Cougar.

Website: South Carolina Among States With the Worst Drivers