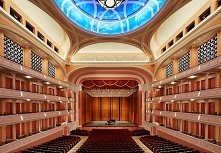 The Gaillard Center is ushering in the new year by launching single ticket sales to two in-person performances and five virtual programs.

Tickets will be on sale to the public on Friday, January 8th at 11 am. You can get pre-sale access by becoming a Charleston Gaillard Center Member. To become a member, contact the Development Office at development@gaillardcenter.org or (843) 579-6468 for more information.

Here’s a look at the upcoming schedule:

Each of the below virtual events will have a $10 ticket available for the public to purchase.

The Gaillard Center is working to announce rescheduled dates as soon as possible for all postponed performances. If you purchased tickets from the Gaillard Center, you will be contacted with additional details. You can contact the Ticket Office at (843) 242-3099 or ticketing@gaillardcenter.org with any questions.