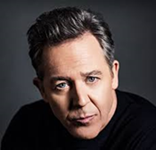 With his own show on Saturday night, and as a regular member of The Five weekday round table, Greg Gutfeld is the self proclaimed sage of Fox News, walking a fine line between libertarian and conservative. A former magazine editor, Gutfeld is best described as a non-religious, television news commentator, who approaches issues with satire, cynicism, and humor.

No stranger to pen and paper, or in modern times the personal computer, Gutfeld released his ninth book ‘The Plus‘ in 2020. The sub-title is ideally placed as an afterthought on the cover, ‘Self Help For People Who Hate Self Help’, indicating Gutfeld is never at a loss to make fun of himself or his ego.

In his latest book he has an epiphany, offering readers it’s more important to be a plus rather than a minus in life, something he’s cultivated over the years. Gutfeld adds, rigid thinking allows unbending minds to create witch hunts and conspiracy theories, leading to boycotts, violent mobs, and militants groups, such as ISIS and Antifa. On the other side of the spectrum Gutfeld proclaims ‘angry moms could change the world’. Amen to that!

Aside from his expected candor, Gutfeld is dead on when offering up, societal issues have less to do with race or gender, and more to do with attraction and status fueled by what he calls the current god in civilization, aka ‘social media’. It turns out Big Brother is not the over-lords in government, but everyday people like you and me.

Gutfeld is a modern day pontificator, never at a loss to opine on a variety of topics. In ‘The Plus’ he provides sound advice to the millions of vacuous social media types, who follow the inane postings of un-informed trolls. He suggests let the minuses have their say, without adding fuel to the fire, in other words, don’t buy into the hype or re-tweet their rants. Be a plus in that moment.

His wry sense of humor comes to the surface, comparing the Trump effect to the the introduction of Elvis on rock n’ roll. Presenting the timeless green Gumby toy in his book, is a nice segue way, reminding readers it’s crucial to be flexible in life.

Another positive sound bite from his book appears on page 62. ‘Be around people who are nicer than you.’ Adding it’s easy for him. No doubt, given his often curmudgeonly retorts. Gutfeld does offer up age old advice such as, ‘don’t judge people by their past’, ‘get the facts first’, ‘don’t copy stupid behavior (Tide pod challenge), and ‘what doesn’t offend you makes you stronger’. In closing he advocates communication if better than violence, and laughter heals.

While ‘The Plus’ may not cover groundbreaking material, it does provide a more jocular perspective, with Gutfeld asserting, when you’re on the social media highway, take the road less travelled. In layman’s terms, not everything is black vs. white, liberal vs. conservative, or republican vs. democrats. Gutfeld says weigh the pros and cons and learn to find common ground. ‘The Plus : Self Help For People Who Hate Self Help’ does suggest there is a softer side to Gutfeld, and during the writing of the book he’s taken a healthy dose of his own written medicine.

Peter Frampton Opens Up In ‘Do You Feel Like I Do?’