Editor’s Note – **Trigger warning**: this post mentions suicide, depression, and addiction. In a crisis, call the National Suicide Prevention Lifeline at 1-800-273-8255 or text “NAMI” to the Crisis Text Line at 741-741. Both programs provide free, confidential support 24/7. 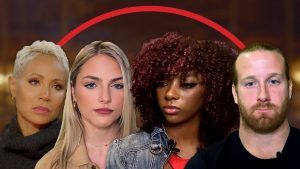 While the winter holidays can make everything seem merry and bright, this time of year can be tough for many people. Instead of a broadcasting a typical holiday-themed episode of their show Red Table Talk, Jada Pinkett Smith, Willow Smith, and Adrienne Banfield-Norris (aka Gammy) spoke with suicide attempt survivors, including former South Carolina Gamecocks star and current NFL player Hayden Hurst.

This new episode of “Red Table Talk” is streaming now on Facebook Watch here. Hurst’s story begins at the 19:36 mark. You can read an excerpt below.

“All throughout my life…it was always about sports,” Hurst said on the show. “Everything was sports oriented. I get drafted by the Pittsburgh Pirates and I get thrown into their professional system at 18-years-old and didn’t have any success whatsoever. That’s when the anxiety part of it really started to hit me. They kept me out of competitions, kept me out of games and I wasn’t able to do what I felt like I was born to do. Growing up, I was my family’s golden ticket and I was going to pitch in the major leagues…and I was going to help them pay off everything and [that] was getting ripped away from me. That’s when, unfortunately, I turned to drinking and drugs and anything I could get my hands on to numb that embarrassment and that pain.”

“Yeah, I know that one,” Pinkett Smith responded. “If you could take us back, what was happening the night you tried to kill yourself?

“I left baseball [and] I went to the University of South Carolina,” Hurst said. “I figured I would leave all my problems behind me and it didn’t happen at all. I think unfortunately it’s hereditary. I have addiction problems that run deep in the Hurst family and one night I was out with some friends drinking and [I] mixed Xanax with it. What I’ve discovered was, when I’d reach for the bottle or reach for pills, it was to get blacked out and to be incoherent. It was pretty severe depression and that night, I didn’t want to be here anymore. I woke up…and I was handcuffed to a hospital bed and my wrists were stitched up. My jeans were covered in blood and I just realized that I had tried to kill myself….That was rock bottom for me. It’s just this darkness comes over you and you can’t really control it, and the only way you feel like you can get out of it is to end your life. For some reason, God shined down on me and gave me a second chance at this thing. I just feel blessed to still be here.”

“For other people who are on that brink, what would be some advice?,” Pinkett Smith asked.

“I would say just keep fighting the fight,” Hurst responded. “It does get better. It absolutely gets better and unfortunately, for me it took a breaking point for me to realize that I needed to reach out for help and it was the absolute best thing I’ve ever done in my life.”