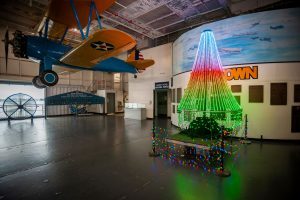 A limited number of tickets will be sold for the tour that runs daily at 11 am and 1 pm between December 21st and January 1st.  Tickets may be purchased in advance online using this link.

Visitors will learn about what life was like for sailors at sea during World War II, Vietnam, and during the recovery of the Apollo 8 space capsule, while they are led through areas of the historic aircraft carrier that are off-limits to the general public.

Among many stories told during the tour are the details of how the Apollo 8 space capsule crew decided to read the first 10 chapters of the Bible to the entire world while looking down from the moon on Christmas Eve in 1968. The USS Yorktown recovered the space capsule and crew a few days later on December 27th. Tour-takers will also get to see the menus for Christmas supper aboard the USS Yorktown and visit the quarters where admirals and captains dined during the holidays.

The combined cost of the tour and admission to the museum is $39 for adults, $29 for children, and $34 for seniors.  Those interested in taking the inaugural tour are encouraged to purchase tickets in advance online.