Whenever you have an accident between a pedestrian and a car, the pedestrian will reap the worst of it. What happens if you hit a jaywalker who didn’t use the crosswalk? Naturally, you might think of the pedestrian as faultless, but it doesn’t always happen that way. If the pedestrian jaywalked or violated another traffic law, they could be the one at fault, or, more commonly, partially at fault.

Of course, you never want to put yourself in a situation where you hit a pedestrian. Even if the person was jaywalking, you could still be on the hook for their bodily injury claim and future medical bills. The courts may also find you liable for lost wages, pain and suffering, and mental anguish. Drivers must drive responsibly, or the consequences can be expensive in court. No matter what, you should watch out for pedestrians, even if they’re breaking the law.

In some instances, a jaywalker might have a case against you. If you struck a pedestrian and you could have avoided the accident, the courts could hold you liable. Another example is if it can be proven that you were driving distractedly when you struck a pedestrian. For these kinds of cases, the pedestrian could hold you liable up to an extent. Drivers can’t hope to successfully fight a case like this if they were driving in a negligible manner.

Let’s take a scenario where the pedestrian ran out in front of your vehicle without warning. In some cases, looking at fault can be as simple as this. If the pedestrian ran out unexpectedly, and a car struck them, they are at fault. Witness testimony can be essential for proving fault on either side. Getting the testimony of witnesses from either side can swing the case in either direction.

If the driver is at fault, the pedestrian will collect damages from the driver’s insurance policy. The pedestrian might be at fault if they were intoxicated, crossing against a traffic signal, or walking along the highway.

What Happens with My Car Insurance

After you have hit someone, many people report feelings of shock and guilt. You might wish that you had only paid more attention. Some drivers worry about what will happen with their car insurance after an accident.

Every situation differs because you may or may not have had incidents before. In cases where you hit a jaywalker, and you had collision coverage, you can turn to this to protect yourself. The insurance company investigates to determine fault. If they find you at fault, the bodily injury coverage will usually cover you.

Let’s say that they find the jaywalker at fault. The insurance company doesn’t want to go after him financially. In that situation, you will be covered, but they won’t cover your deductibles. All of this depends on your insurance policy and if you were involved in accidents previously.

You have cases where you might share fault with the jaywalker. Pedestrians who jaywalk have broken a law. It is not uncommon in a pedestrian accident case for the injured individual to be partially blamed for the accident. That means the damages that they can collect will be lower. How this works will depend on the rules in the state where the accident occurred.

Jaywalkers make the streets less safe because they can walk out anywhere on the road. Across the United States, they consider it illegal, and if you hit a jaywalker, you have a better chance in court than if you hit a person at a crosswalk. Most pedestrian deaths with vehicles happen at non-crosswalks, where it is common for people to jaywalk. Drivers get the blame if they run red lights. Pedestrians should be held to the same standard and cross at the specified areas. 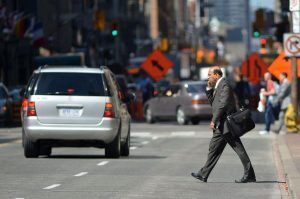 Discover the most successful small businesses in 2020