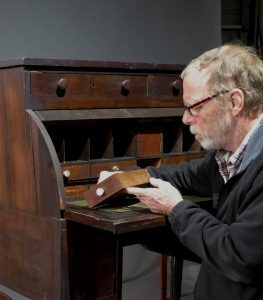 Russell Buskirk’s daily life could easily be a mini-series that follows his adventures involving his work as an antique furniture master restorer and broker.

He’s a splendid storyteller. Any listener’s heartbeat would quicken if they heard his description of bidding on the 19th Century cylinder desk made by Duncan Phyfe; that he longed for. The piece had been found in a state of poor repair under a home by the Ashley River. Of course, you share the letdown he must have felt on being outbid at the Mt. Pleasant auction. However, 15 years after that auction, as often happens in Buskirk’s world, loose threads are eventually tied.

That same desk came back on the market at a Camden auction last month. This time, Buskirk was the high bidder. And this week, he picked up the piece to bring it back to Charleston.

“It’s a big project,” he said, estimating that repairs of the veneer and other elements of the beautiful desk will take months to restore. 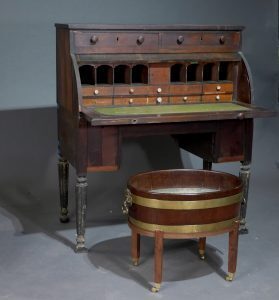 This and other treasures he locates may have a provenance that includes a stint in decidedly rough and tumble environments, but Buskirk’s specialty also takes him to some of the exquisite homes of collectors who may have dealers throughout the country seeking historic pieces to tempt them.

“So, we knew there was probably another one out there,” he said.

When a dealer, also a mutual friend of the collector and Buskirk, came south to Charleston bringing an oil painting for their consideration, he spied and admired the card table. Later, back in Virginia, the dealer saw what looked like the matching table in an auction catalogue. Buskirk went to New York to acquire the piece that now stands with its mate in the collector’s parlor in downtown Charleston.

Some finds certainly require more repair and restoration than others. Another current project is an 18th Century wine cooler made in the Chippendale workshop. The piece was purchased from the Scottishowners after they came for a visit in Charleston. The mahogany barrel-like piece is bound by brass bands. It has traditional brass lion-head lift handles. Unfortunately, the piece is missing the accompanying carved mahogany stand.

Buskirk contacted the curator at Dumfries House in Scotland to get details about the original stand of their similar wine cooler. He’s also been tracking down brass casters of the design used on the legs. Only two casters are available from his hardware supplier. They will have two more cast in the molds made from period 18th Century casters.

Buskirk is enthusiastic sharing his knowledge in his upcoming Winter Intensive Class on January 4-8 , focused on antique furniture restoration at The American College of Building Arts.  He encourages those who have an interest in antique restoration to register and bring their piece to the class. Buskirk will teach the participants how to do the repairs. He will demonstrate complex and more difficult techniques.

For more information or to enroll:
Winter Intensives
ACBA.edu
Wade Razzi at razziw@acba.edu

Follow us
Related Topics:American College of Building ArtsRussell Buskirk
Up Next