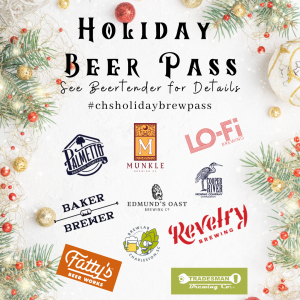 From the team that brought you the beer trolley, comes The Holiday Beer Pass. Edmund’s Oast Brewing Company created 1,500 Beer Passports that encourages customers to visit all ten facilities in the brewery district.
The first 200 people to visit all of the breweries – and get their beer stamp at each stop – will have the opportunity to attend a private 2021 Brewery District Beer Festival (socially distanced of course)! More details on the festival will be announced at a later date.
You can pick up your Beer Passport at your favorite brewery. You will then need to complete the required task to get your stamp. The race began on December 1st and ends on New Year’s Day.
Participating breweries include: