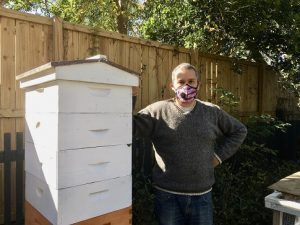 At this time of year, Grant Gilmore says, his 80,000 bees have to wait for his time and attention as he only has them every couple of weeks. This is apparently fine all around.

The bees occupy a traditional wooden Langstroth beehouse Grant maintains in the backyard of the home in Mt. Pleasant he shares with his wife, Joanna, and their two children. They produced four gallons of honey this year. Recently for the first time, Gilmore offered his small batch honey in jars of various sizes for sale. He only has three 8-oz. mason jars left.

Grant is originally from Florida. He and Joanna, who is English, moved from the UK to Charleston about six years ago when Grant, who has a PhD in historic archeology, was hired as a professor at the College of Charleston. This year in addition to serving as Director of three academic programs, he is also involved in continued fundraising efforts to ease the burden of student tuition costs. Joanna teaches at CofC in Museum Studies and is Director of Research and Development at the Gullah Society.

At Christmas two years ago, Joanna gave her husband a Master Class in Beekeeping with the Charleston Area Beekeeper Association (CABA) as a surprise holiday gift. As soon as he could, Grant started applying his skills. The first season went well. After a problematic period for bees throughout the Charleston area brought about a pause, he purchased this new group of bees. They proved highly productive.

The bees feed on the large clusters of cosmos (cosmos sulphureus) and other flowers planted around the house. A fierce advocate for the natural environment, Grant takes time in a discussion of bees to warn area gardeners and homeowners about the dangers of paying to have mosquito insecticide sprayed around properties. The chemicals are toxic not only to mosquitos, but to butterflies, ladybugs and fireflies, which are rarely seen anymore across much of the United States. 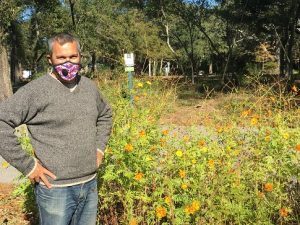 By contrast, in a far more positive vein, Grant shares his enthusiasm for the well documented health benefits of local honey which may reduce seasonal allergy symptoms for residents who eat honey produced in the area in which they live. His bees are housed in a distinctive structure that consists of a number of boxes one placed above the other.  Grant has a series of six. He has seen a tower of as many as thirteen. A fair amount of the honey is not removed for human use, but is left for the bees to consume during the cold winter months. Bees collect pollen from nearby southeastern domestic and wildflowers in warmer weather.

These days, when he is not out in his protective bee suit bee-keeping, Grant is teaching and also engaged in a curatorial project for Charleston’s International African American Museum. This work involves acquiring artifacts of the enslaved and free Blacks of the Caribbean and Central America.  Ceramic objects, musical instruments and cooking utensils from both historic communities will be compared and contrasted to similar communities of the 17th and 18th Centuries in Charleston when the museum opens.

He’s also writing a book on the commercial activities related to areas such as dock and warehouse workers that were simultaneously occurring in St. Eustatius in the West Indies and in Charleston as part of the evolution of capitalism. Enslaved people and free Blacks working in commerce are less familiar to the public than agricultural activities related to rice and cotton in communities outside of the city.

Understandably, beekeeping offers a complete change of pace.  Grant is not alone in his interest. He is one of between 100-200 members of CABA who consult and advise each other virtually. While Grant is relatively new to beekeeping, he believes that the activity goes way back in Charleston (with a German variety) and that the Italian variety in his hives may have been imported by the 1850s to the United States.

Follow us
Related Topics:Charleston Area Beekeeper AssociationGrant Gilmore
Up Next