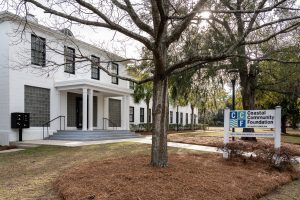 Coastal Community Foundation of South Carolina (CCF) on Thursday announced that it is one of 20 community foundations in the United States to receive $1 million from Facebook to manage grantmaking programs supporting Black communities and Black-led nonprofits.

Earlier this year, Coastal Community Foundation announced it would take action to address racial injustice and inequities across our region. In addition to ongoing work through the Foundation’s advocacy, investment, grantmaking, and scholarship programs, this partnership significantly advances the Foundation’s goal to create communities rich in equity and opportunity for everyone in coastal South Carolina.

CCF will award funds over two years to nonprofit organizations and programs in Berkeley, Charleston, and Dorchester counties supporting innovation, creativity, and resiliency in Black communities. Preference will be given to Black-led organizations.

Funds from the Facebook grant will also support these four specific initiatives:

“To be chosen as a leading, equity-centered organization in the United States trusted with managing this new program is a high honor for our organization,” said Darrin Goss, president and CEO of Coastal Community Foundation. “But more than anything, it should signal to Black-led organizations that have too often been overlooked that a new era has in fact begun. We should expect to see many more corporations following the lead of Facebook, to support the vibrant work already happening in our communities to make our world more just and more equitable.”

“We’re excited to work with Coastal Community Foundation to help bring much needed funding to nonprofits that are serving and supporting the Black community in the Charleston region,” said Marcy Scott Lynn, Director of Global Impact Partnerships at Facebook. “We’re providing funding directly to Coastal Community Foundation to build on their track record of supporting Black-led nonprofits and ensure that people locally are making the decisions about where these dollars are most needed and can have the most impact.”

Coastal Community Foundation of South Carolina is a 501(c)(3) nonprofit that works to create vibrant communities by uniting people and investing resources across Beaufort, Berkeley, Charleston, Colleton, Dorchester, Georgetown, Hampton, Horry and Jasper counties. Through our tools for long-term charitable giving, we help individuals, families, businesses and organizations be the reason why communities thrive in the nine counties we serve along South Carolina’s coast. To learn more, visit coastalcommunityfoundation.org or call (843) 723-3635.