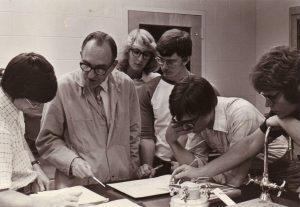 Dr. K. Nolon Carter, Charles A. Dana Professor Emeritus of Chemistry at Presbyterian College, died on Saturday, Dec. 5. He was 95.

Dr. Carter joined the PC faculty in 1951 and retired in 1987, after 36 years of teaching at PC. One of the first two professors to receive a named chair, Dr. Carter was named the Dana Professor of Chemistry in 1970.

He served many years of his tenure as chair of the Department of Chemistry. While he taught many chemistry courses, Dr. Carter was most known for his organic chemistry course. Students who wanted to go to medical school were required to make at least a B to be considered for medical school.

Many of Dr. Carter’s students continued their relationship with him after they entered medical professions. This lasting influence showed how well Dr. Carter prepared students for the rigors of medical training.

“As an inexperienced assistant professor fresh out of graduate school, I quickly became Nolon’s student. Strict, fair, precise, and interested in me, he contributed in a major way to my development as a college-level teacher.

“This caring mentor, talented chemist, teacher, friend, and man of integrity was largely responsible for my satisfying career as a PC faculty member.”

In addition to his teaching, Dr. Carter was active in research work, received several research grants, and published the results of his research in a number of professional publications.

Dr. Carter introduced modern instrumentation into PC’s undergraduate chemistry laboratory, with special emphasis on spectroscopy. He also produced a number of single-concept instructional motion pictures which were made available nationally by the Advisory Council on College Chemistry.

In 1973, Dr. Carter was awarded the Alumni Distinguished Teaching Award. The award recognized classroom teaching skill reflecting both scholarship and concern for the individual student.

Dr. Carter shared with his wife, Eugenia G. Carter, the 1986 Board of Visitors Outstanding Service Award. Mrs. Carter was a versatile and respected teacher who taught science to PC students in full- and part-time positions.

In 1987, Dr. Carter completed 36 years as professor of chemistry and department chairman. When he retired, the couple’s former students recognized the contributions of the Carters to the life of PC by establishing the Carter Endowment Fund.

“Dr. Carter cared deeply about PC,” said PC President Bob Staton. “Even after he retired from teaching, he always checked on how things were going and was encouraging and supportive of the work underway at PC.

“While he lived a long and active life, the impact of Dr. Carter’s life will live on in the lives he touched and shaped during his years at PC. He will be missed but not forgotten.”

Dr. Carter was a faithful donor to PC, having been a yearly donor from the time he came to PC until the time of his death.

As many PC professors and alumni may remember, the Carters lived in a little white house on Fifth Avenue behind the Old Bailey Stadium area. They were known for riding their bicycles to and from campus almost every day.

They were also known for their love of tennis. Mrs. Carter played with a group of women from Clinton against opponents from other areas in competitive matches. Dr. Carter was also known for his love of flying. He continued to fly planes, as well as ride his bicycle until a couple of years ago.

The Carters moved to Missouri to be near their son in 2003, after having lived in Clinton since 1951. Mrs. Carter passed away in 2008.

Follow us
Related Topics:Dr. K. Nolon CarterPresbyterian College
Up Next