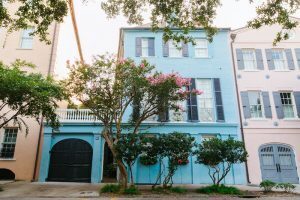 On Sunday, December 6th, the Preservation Society of Charleston will launch the final virtual house tour of 89 E Bay Street on Rainbow Row as part of their successful four-part series this fall.

The series featuring virtual house tours of historically and architecturally significant homes in Charleston is narrated by the Preservation Society of Charleston’s Executive Director, Kristopher King, and includes guest historians and homeowners; historic photographs; primary source maps; and commentary from other contractors, architects, and preservationists edited into the house tour footage.

The final virtual tour in this four-part series features 89 E Bay Street – the blue house on Rainbow Row – and will be released here on Sunday, December 6, 2020. This house, built in 1787, is notable for its ornamental ironwork, heart pine floors, custom stairwell mural, and original mantels and woodworking. The 20th century effort to save and restore the group of wharf-side buildings, today known as Rainbow Row, is an important part of this house’s history. In addition to sharing the history and architectural details of the house and garden, Historian and College of Charleston Scholar-In-Residence Harlan Green shares the details and stories of the homes previous owners, from Adam Tunno, to Preservation Society founder Susan Pringle Frost, to Harry Hervey.

All four of the Preservation Society’s virtual house tours are available to purchase for a limited time only. For more information on the virtual tours and to rent, visit https://vimeo.com/ondemand/pscvirtualtours.

SC Humanities and the Joanna Foundation supported this educational program and all proceeds support the mission of the Preservation Society of Charleston.

Follow us
Related Topics:Preservation Society of CharlestonRainbow Row
Up Next