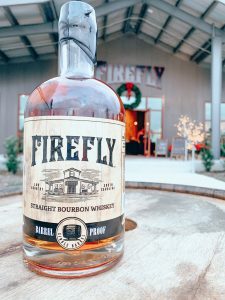 Firefly Distillery released a special edition Barrel Proof Bourbon that’s available just in time for the holidays – but with a limited run of only 185 bottles. This single barrel bourbon is aged five years and bottled at a cask strength of 121.62 proof.
“It’s been a one-of-a-kind year, so why not end it with a one-of-a-kind bourbon?” head distiller and general manager Jay Macmurphy said. “Our new barrel proof bourbon captures the purest form of bourbon: uncut, unfiltered and straight from the barrel.”
Firefly Distillery says single barrel bourbon is a distinctive experience as every bottle can be traced back to one barrel. This particular cask was identified as special with its composition, tasting notes and aging process. It’s known that each barrel can age differently, whether it was stored on ground level, near a window or the weather it was exposed to throughout its aging process, all contributing to the uniqueness of the bourbon.
Bottles are hand labeled with their unique proof and batch number. At cask strength, Firefly says “the nose, taste and finish are strong and robust.” The Barrel Proof bourbon has “an intense and viscous mix of vanilla, caramel and spice that explode on first sip, followed by a surge of smoky oak, cinnamon, nutmeg, buttery rye toast and spice.”
The bourbon is only available for purchase at the distillery on Spruill Avenue in Park Circle. For more information about the distillery, Firefly Spirits, tours, and tastings, visit www.fireflydistillery.com. Click here to learn how to drink bourbon like a pro.