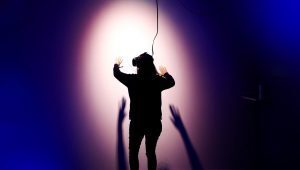 Virtual Reality (VR) and Augmented Reality (AR) are no longer an unheard-of novelty. They are common in industrial use, employee training, health care, navigation, and beyond. Besides, VR and AR provide solutions to many problems that business owners in entertainment face, including the lockdown. Just imagine how awesome it would have been if, instead of canceling this year’s Spoleto, the organizers made it possible by means of virtual reality. So, here is an overview of how VR and AR are used in the entertainment industry.

The most obvious and well-known segment of the entertainment industry where VR and AR are used is gaming. For most people who are far from the world of futuristic technology, a person wearing a VR headset means a gamer. Such an assumption is not far from the truth. At the moment, gaming does remain the number one use of XR (Extended Reality – meaning both VR and AR) in the entertainment industry. Just think of pervasive games, such as location-based games that use information about the player’s physical location to recreate and enhance the reality that surrounds them in the gameplay. How impressive is that?

The online gambling industry is gradually embracing VR and AR as well. First, think of live casinos, where you can play games with live dealers. Technically, this is not VR or AR, yet the effect is pretty much the same. The main goal of content creators, including online casino providers, is to make the client’s experience immersive so that they come back for the thrill. Live casinos allow you to play almost any table game (roulette, baccarat, blackjack, you name it) without leaving the house. You get to interact with the dealer and other players and see the dealer and playing table in front of you. The goal of live casino operators is to create a sense of ‘being there,’ which is exactly what VR and AR are supposed to do.

However, the use of VR and AR in iGaming is not limited to live casinos. Many online casinos also offer VR table games where the dealer is nowhere near live, yet, thanks to a VR headset, the player still gets to experience ‘a total immersion.’

2020 has not been a good year for sports fans. With almost all major tournaments and cups canceled, people who used to spend a couple of evenings per week watching athlete super-stars had to adapt. And, once again, VR and AR came to the rescue. Sure, this is not a mainstream technology at the moment. However, the sports industry will catch up with the rest of the entertainment sector in a couple of years. Thanks to VR, viewers will have an opportunity to see the nuances of the sporting events closer than ever before, while the costs of ‘watching’ a game will go down.

The rest of the entertainment industry will probably follow the footprints of the sports industry. Because of this year’s lockdown, it is no longer weird or frowned upon to have a DJ party or concert in Zoom. The next logical step is to improve such experiences for the viewer, and XR is a perfect option. Just imagine what would have happened if former concert and party-organizations who lost their money because of the lockdown had started using VR to broadcast games (real or fully virtual) back in spring. Their financial losses could have been way less.

Finally, the newest addition to the world of VR and AR technology is the so-called VR CAVE (Cave Automatic Virtual Environment). Contrary to traditional VR/AR devices, CAVE is actually a tiny room where all surfaces “can be used as projection screens to create a highly immersive virtual environment.” It is less physically restrictive than usual VR and has a more expansive list of features. The player is placed in a cubicle, but, thanks to VR, they can feel what walking on the beach or jumping off a cliff feels like. Another handy thing during the lockdown.

The Smart Homeowner’s Checklist for All Things HVAC Repair