While their business name is new, the nature of their business is not new to Charleston. Open since 2012, B. Gourmet recently (Oct 2020) rebranded as Rosemary & Rye Catering, with husband and wife owners Chris and Meghan Timby taking the established eight year old catering company up a notch or two.

Both are industry veterans. Chris runs the operations side of Rosemary & Rye (R&R), with Meghan a longtime chef, working in the kitchen alongside several career food & beverage types, including Steve ‘Jacks’ Jackson and Scott Vosburgh. The catering team comes full circle with Sabrina Hinson, who brings a whole lot of youthful energy to her sales and scheduling position.

Schooled at The Institute of Culinary Education in New York City, Meghan developed her cooking skills in big city restaurants and TV production houses, before returning to Charleston, where she transitioned her made from scratch talents to event management and full time catering. Meghan knows her way around the kitchen and enjoys creating specialty meals and dishes for clients.

Jacks is the old pro at R&R, with his resume’ looking more like a who’s who of culinary hierarchy. After working as a chef for former SC Governor Richard Riley, Jacks spent several years as a personal chef on feature films, moving on to become an executive chef of the iconic, Old Post Office on Edisto Island, before finally opening his own business Mr. B’s BBQ, before taking over the reigns of event manager with Duvall Catering in Charleston.

Born in New York, Scott has been ‘cured’ (pun intended) in South Carolina, with his culinary journey beginning at Roy Yamaguchi’s Hawaiian Fusion Restaurant on Jacksonville Beach in 2003. After a short stint at Azia in Greenville, Scott brought his mastery to the low country serving as executive chef at Oscar’s (Summerville), Tabbouli (Charleston), and Eli’s Table (Charleston). A nice Holy City triple threat.

Sabrina is the who, what, where, and when person at Rosemary & Rye Catering.  Who’s getting married? Who is having the party? What foods do you like? What package would you prefer? Which price point best serves your event? When is your event set for?  Need to book it, call Sabrina. 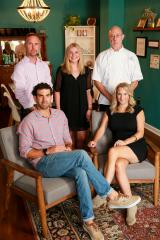 According to Meghan, the office and kitchen quintet are a pleasant mix of serious and creativity, with just enough new and old school seasoning to fine tune any event that comes their way. Whether you want traditional, gluten-free, entirely vegan, or a straight up Southern flair, Rosemary & Rye will custom a catering menu to satisfy your tastes, as well as your budget.

But enough about their talents and exceptional customer service, what really sets Rosemary & Rye apart is their eclectic menu, including their often thinking outside the usual ‘lunch box’ specialties. If you can imagine it, Meghan admits more often than not she and her fellow artisans can craft it in the kitchen.

Their main entrees are a composite of many upscale dishes served at seafood, steakhouse, BBQ, and Italian restaurants. Seeking a plethora of entree choices, than R&R will satisfy the palate. Maybe hoping to please the home team, than their Shrimp & Grits is just what the food doctor ordered. If you want to go simple yet elegant, than I highly recommend the caprese ravioli blanketed in a vibrant vodka sauce. Freakin’ awesome! 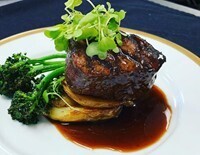 Carnivores have many options, with none better than the Petite Filet Mignon, glistening in a cabernet demi-glaze. As succulent as it is eye appealing. Dress it up with a lump crab cake perfectly seasoned with thyme au jus (wine infused) and a lemon dill sauce. An ideal surf and turf blend.

If you’re going with a southern theme with a bit of panache, perhaps include mini tomato pies, mini crab cakes, bacon wrapped scallops, mac n’ cheese cupcakes teeming with aged gouda and crispy prosciutto. No matter if your event is scheduled for winter, spring, summer or fall, Rosemary & Rye has delectables that accompany cool, mild, or hazy hot & humid appetites. You can go all out with carving stations and chef attended tapas stations. Something for everyone.

Whether you want entrees from the land, the sea, or the garden, Rosemary & Rye offer up a wide variety of entrees, appetizers, soups, salads, and desserts to tantalize the taste buds. The Duck Confit Egg Roll with a spicy blend of bok choy, red peppers, carrots, and ginger is a nice hand held edible, and a pleasant way to kick start a meal.

Did I mention the sides, over 15 choices. Three signature potato dishes, two variations of broccoli, and oven roasted asparagus with parmesan lemon zest that will make your mouth water. Enough grits, rice, and pasta sensations to complete any southern table.

No catering package is complete without some cobblers, cakes, and pies. How about a dainty hand held sweet treat. Lemon squares, praline pecan bites, and traditional Charleston blondies make for a nice ending to a low country meal. You can get chocolate mousse with fresh cut fruit, or have a strawberry shortcake station set up with chantilly cream and julienned mint. Ooh la-la!

Rosemary & Rye can cater to a few hundred for a wedding or company luncheon, or customize an intimate dinner party in your home. They have become a preferred vendor on Kiawah, Seabrook, Dunes West, and the historical district in downtown Charleston. But don’t let the high dollar neighborhoods fool you, R&R can easily custom a package for any budget.

One of the sweetest tasting things about Rosemary & Rye is their local networking flavor. Not only do they make everything from scratch, they buy almost everything they prepare from local vendors. R&R purchase local produce from Limehouse and Grow Foods, getting underwater edibles from Crosby’s and Abundant Seafood.

Planning a wedding, an anniversary, milestone birthday party, or just want to entertain friends in your home, let Rosemary & Rye take care of the food for your special occasion. You’ll find a menu selections that are contemporary, traditional, and avant-garde. And according to Meghan, Jack, and Scott if you can imagine it, they can create it. From unique to chic, and from everyday to blow you away,  they do it all. For more on Rosemary & Rye Catering visit their website at https://rosemaryandryecatering.com/

Interested in adding libations to your gathering. Rosemary & Rye recently acquired Squeeze Cocktail & Beverage Catering, who have not only set the standard, but much like their new partner have raised the bar on customer service and hospitality. Whether you seek craft beers, select wines, or

specialty cocktails, Squeeze serves up the finest adult beverages coupled with finest mixologists in Charleston. An ideal pairing with Rosemary & Rye. Check them out at http://www.squeeze-onsite.com/