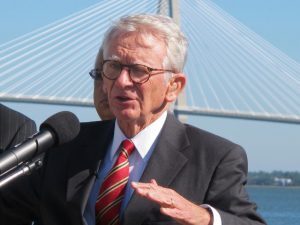 The stretch of harbor where the South Carolina Aquarium sits will soon have a new name: Riley Reach. The City of Charleston and the Aquarium will make the official announcement on Monday and dedicate the space to former Charleston mayor Joseph P. Riley, Jr.

Riley Reach is a designated shipping channel that runs from the Ravenel Bridge, past the Columbus Terminal, South Carolina Aquarium, and future International African American Museum to the Maritime Center.

“Perhaps more than any other leader of his generation, Joe Riley understood that a great city, even one as lovely as Charleston, must always be a working city – a place where the bustle of modern commerce energizes and enlivens the elegance and natural beauty of its surroundings,” Charleston Mayor John J. Tecklenburg said.  “That’s why it’s so appropriate, and so satisfying, that this working shipping channel, this vital artery of trade and industry and enterprise, will now carry his name into the future.”

Riley served ten terms as mayor of the City of Charleston from 1975 to 2016, a period of substantial growth in the area. He is known for his innovative redevelopment projects, including the South Carolina Aquarium.

“Joe Riley had the initial vision for the creation of an aquarium here on Charleston Harbor and embodies our mission of connecting people with water, wildlife, and wild places,” sKevin Mills, president and CEO of the South Carolina Aquarium, said. “We are thrilled to be a part of this dedication to honor him.”