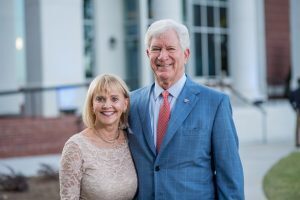 Stanton with his wife Phyliss

Staton Hall will be the name of the central building of the recently constructed residential complex on campus, named in honor of outgoing PC President Bob Staton. PC Board of Trustees chairman E. G. Lassiter made the announcement during a farewell reception honoring both Bob and First Lady Phyllis Staton on Alumni Green on Friday, Nov. 13. Because of the pandemic, attendance at the event was limited to board members.

“It is not hard to look around campus and see all that has been accomplished over the past five years under Bob’s leadership,” Lassiter said. “There are new and renovated spaces for our students to live and learn, a larger and more diverse student body, more academic and athletic offerings, and an engaged board, just to name a few.

“However, it is the unseen that I believe Bob and Phyllis are most proud of, the relationships that they have built with the more than 2600 students who have been PC students during their tenure.”

In addition to announcing Staton Hall, the Board of Trustees announced the establishment of the Robert E. ‘68 and Phyllis B ‘18 (h) Staton Endowed Scholarship and endorsed a fundraising effort to raise $1.5 million in scholarship support in the Statons’ honor before their scheduled retirement on December 31.

Lassiter mentioned how the Statons participated on campus, including helping students move in and attending events during Welcome Week and attending capstone presentations, athletic competitions, and cultural events.

“Bob and Phyllis have embraced the campus community fully,” Lassiter said, “and have certainly made Presbyterian College a better place for current and future students.”

During the event, PC Provost Dr. Don Raber thanked the Statons and offered remarks on behalf of PC’s faculty, staff, and leadership team. Raber used four words to sum up his thoughts on the Statons’ tenure at PC: “energy,” “enthusiasm,” “determination,” and “devotion.”

Raber also spoke about the determination and drive Bob and Phyllis exhibited over the last five years.

“There have been challenges,” Raber said, “but, with the determination both of you have shown over the last five years, you’ve quieted skeptics, silenced doubters, and made believers out of people in The Promise of PC, (the College’s strategic plan).

“And your devotion for each other shines through in everything you see as well as the devotion for PC. I’m speaking to an audience where every person within the sound of my voice is devoted to PC, but, Bob and Phyllis, I think your devotion to PC has clearly shined through each and every day in a way that is unique and is special, real, committed, and extraordinary.

“It’s amazing to see how much love both of you have for Presbyterian College and how that love for PC allows PC to do incredible things.”

A Recent Grad and Current Student on the Statons’ Impact

PC senior Abby Lehman and Nicholas Quatraro, currently a student at the University of South Carolina School of Law, also shared their thoughts about the Statons during the reception.

“A true sign of distinction that sets President Staton apart from others who hold similar positions at other schools is his character,” Quatraro said.

“His genuine love for this place that we all call home. His genuine interest in not only building an individual relationship with every student, but working and fighting to help us succeed inside and out of the classroom.”

“Getting to know Mrs. Phyllis has been one of my greatest experiences at PC,” Lehman said. “She is everything I look up to in a woman: Her kind and welcoming spirit, her bubbly personality, and the care and compassion she shows to every individual she meets.”

A Parade for the President and First Lady

Before the reception, the Statons paraded on golf carts as PC faculty, staff and students cheered from several locations across campus. The parade began at Smith Administration Building and meandered through campus before making its way to the President’s House, where the yard was full of signs that students created wishing the Statons well.

CofC Student Rides to the Rescue of Facilities Management Employee