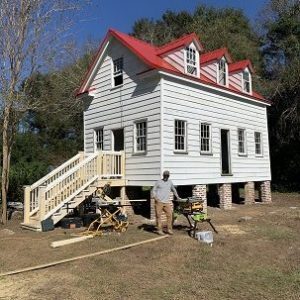 A very special element about the restoration of the Henry Hutchinson House of Edisto Island is that many people, residents, and family know stories about the house before it was abandoned to the elements about 30 years ago.

“They remember how, along with their parents and grandparents, they took shelter in the house that was ideally placed, above flooding levels. And, they tell stories about the eating, drinking and singing, “… having a grand time until the hurricane had passed,” Chris Stone, Hutchinson House Project Manager who works for Artis Construction, said.

The company specializes in renovation and restoration of historic buildings. In this role he has been leading a team on a three-phase plan to restore the 1886 home, the oldest on Edisto Island, to its 1905 prime.

Largely funded by the Edisto Island Land Trust, the goal is to have the home established as a visitor attraction. Work has been partitioned into phases that progress with the success of fundraising.  Not only are the project renovation leads Artis founder Guyton Ash and Chris American College of Building Arts (ACBA) graduates, but the construction crew are all ACBA students.

“It’s such a great way to train students in a real-life project that’s enhancing this community,”  Chris said. 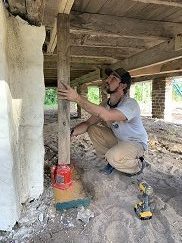 The home certainly is a key to a riveting part of history and offers an education about the path following slavery experienced by local families such as the Hutchinsons.
After the Civil War, Jim Hutchinson, a freed enslaved person, organized other formerly enslaved people who purchased land and built homes on Edisto Island. The only one of these homes left today belonged to Henry Hutchinson, one of Jim Hutchinson’s sons. Henry built the house with members of his family in 1885 when he married. He lived in the house until his death in 1940.
A successful entrepreneur, from about 1900 into the 1920s, Henry was the owner and operator of an early 20th Century cotton gin located close to his home on the island. The gin was active from about 1900 to 1920 when a boll weevil infestation devastated the crop.
Listed in the National Register of Historic Places in 1987,  the house and property were purchased in 2016 by the Edisto Island Open Land Trust.  In 2017, Artis under the leadership of its founder, was engaged to undertake the renovation and Chris Stone came into the picture as Protect Manager.
Chris grew up north of Edisto Island in Mt. Pleasant. While still a student at the American College of Building Arts in downtown Charleston, he began working for Artis. He says he told his boss that as a carpenter, he was particularly interested in timber construction. Guyton, also an ACBA graduate, acknowledged Chris’ interest and skill, putting him on challenging  historic restoration jobs requiring extensive timber framing.
Clearly well matched with the Edisto project, Chris resonates to the Edisto Trust’s commitment to mastering the challenges of restoring this home, which has experienced years of termite and weather damage. In fact, several of the original rooms including the kitchen had deteriorated beyond repair before the renovation began.
The house originally stood on 404 acres. Today, the property amounts to about 22 acres. The house 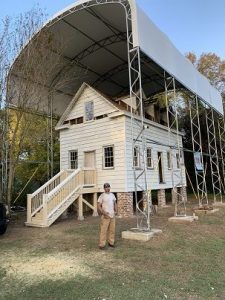 stands on a bluff, where homeowners could catch cooling breezes in the heat of summer.  The building, when Chris and the Artis team began work, was 1 1/2 stories with two bedrooms, a living room, and a sitting room. There was no bathroom. Two years ago, when the project began, Phase 1 was devoted to stabilizing the building. Phase 2 involved jacking up the north wall by 7″ and conducting all structural repair. Phase 3 of the restoration will involve reconstructing a wraparound porch.
Chris notes that among other artifacts found during construction was a Sunday school roll call book.
“Many of the names of the children who are listed have relatives who still live on the Island.”
Soon, locals and tourists will be invited to come in and look around and enjoy this historic site.