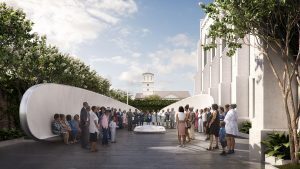 The Mother Emanuel Memorial Foundation Board, which manages the fundraising, construction, endowment and outreach for the Emanuel Nine Memorial, announced Kimberlyn Davis as Executive Director today. The Board has selected Davis, a Charleston resident and former marketing executive, to guide the construction of the memorial and lead the foundation’s educational programs and outreach to help eradicate racism.

In this role, Davis will facilitate ongoing fundraising efforts, provide oversight on memorial construction and lead all outreach initiatives. The Foundation’s outreach programs will focus on the implementation of anti-racism and racial equity curriculum for students in South Carolina and beyond. These initiatives will launch with the opening of the Emanuel Nine Memorial, the permanent memorial honoring the nine clergy and church members murdered in 2015 at the Mother Emanuel A.M.E Church in Charleston.

“Kimberlyn’s unique professional and personal experiences have prepared her for the challenge of taking on the Mother Emanuel Memorial Foundation’s outreach mission to eliminate racism in our communities through educational initiatives, which begin in our children’s classrooms,” said Reverend Eric S.C. Manning, pastor of the Mother Emanuel A.M.E. Church. “Recent events have brought national attention and momentum to our goal of reversing the spread of racial hatred with the message of God’s unyielding love and forgiveness, and I’m optimistic that the efforts of our communities and supporters will help us bring about real, meaningful change.”

Davis’ past positions include leading Coca-Cola’s grassroots multicultural programs in Nashville and Jackson, Tennessee, and later as a promotions manager in North Carolina, where she expanded her multicultural marketing responsibilities and helped launch brands such as Coke Zero and Vanilla Coke. Davis later served as vice president of small business marketing for Bank of America before transitioning to the company’s home loans team, where she developed the strategic vision to help distressed homebuyers during the housing crisis. After her promotion to senior vice president of marketing programs for home loans, Davis developed strategies for first-time homebuyers with an emphasis on multicultural segments and millennials.

With a fundraising goal of $17.5 million to design, build, protect and maintain the Emanuel Nine Memorial, as well as fund educational outreach and social justice initiatives, the Mother Emanuel Memorial Foundation relies on individual and corporate contributions that can be made online by visiting: www.emanuelnine.org/donate.