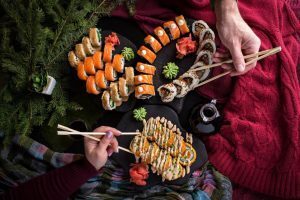 Sushi is one of the oldest and most beloved dishes around the globe. Experts believe the fish and rice dish came about over 1,500 years ago in ancient China.

While much about the fan-favorite finger food has changed in the centuries that passed, one thing that’s remained constant is people’s aversions to sushi, whether due to the smell, taste, or simply the concept of eating raw fish.

Maybe you’re looking to work past those aversions! Or perhaps you’d like to learn about sushi without fish at all!

Either way, we’ve got your back. Keep reading as we give a quick rundown on sushi for beginners, including how to get started and what to order!

Start With The Basics

There are thousands of types of sushi roll out there. So where should you start? We suggest keeping it simple.

The California Roll might not be the most exciting sushi roll in the world, but it’s a classic for a reason.

This roll got its start when a Japanese chef immigrated to Canada. He found that many customers weren’t willing to try the more adventurous dishes, so he decided to create a roll tailored to Western tastes. The result features rice, crab, avocado, cucumber, and seaweed.

Maybe you’re not quite on board with raw seafood, period. That’s okay! Rest assured, there are plenty of great options out there.

Plenty of restaurants create in-house specialty rolls using other forms of protein like cooked chicken, beef, or pork. There’s even a type of sushi that utilizes Spam.

Likewise, plenty of restaurants offer sushi with grilled or steamed fish, too.

If you’re feeling adventurous and want to try a variety of sushi types, we suggest a sushi night at a revolving sushi restaurant. Think of it as a buffet that comes to you.

Chefs load all types of sushi on a conveyer belt that goes passes each table. You can grab whatever you want, and however much you want! It’s a great way to learn how to eat sushi.

And don’t forget, if you’d rather not head out, you can always order sushi online!

Sushi is an umbrella term. Within the world of sushi, there are dozens of types of sushi. However, there are three you’ll often encounter.

Here’s what you should know about each!

Often known as the “inside-out” roll, makizushi is the most common type of sushi you’ll encounter in North America. It features rice on the outside, with the main protein in the center of the roll.

Examples include the California Roll, the Rainbow Roll, and the Spider Roll. Makizushi, while often raw, can sometimes be cooked, as well.

Sashimi features the protein thinly sliced and placed atop a bed of rice. Sometimes, the roll is kept together using a thin slice of moist seaweed that acts as a natural glue of sorts.

Hosomaki rolls are similar to makizushi rolls, except the seaweed is on the exterior of the roll and they tend to be a bit thinner. Aside from that, the two are quite similar.

We hope you’ve enjoyed this dive into the world of sushi for beginners! Now, we don’t know about you, but we’re getting hungry…

But before you take off, make sure to check back with the rest of our blog! We have tons of awesome content you’re sure to love.

Can the New England Patriots really make it to the playoffs l Will they be able to reign supreme and save the season?

How To Get Text Messages From Another Phone Sent To Mine?