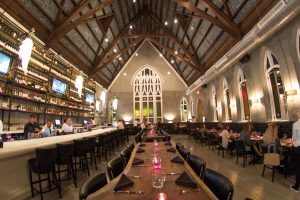 5Church Charleston will celebrate its five-year anniversary on Thursday, November 19th. While the restaurant will not be hosting its normal, yearly celebration, the 5Church team will be recognizing its anniversary with a special, “throw-back” menu comprised of some of its most popular dishes from over the years.

Those menu items include Korean BBQ Cauliflower with honey yogurt and sesame; Chicken Roulade with butternut squash, mushroom, and tomato confit; Red Snapper with pirlou, haricot verts, and tomato emulsion; and the restaurant’s Pretzel Bar with vanilla gelato and caramel (Items will be priced individually).

Reservations for 5Church Charleston’s five-year anniversary are highly recommended and can be made at www.5ChurchCharleston.com or by phone at 843-937-8666.