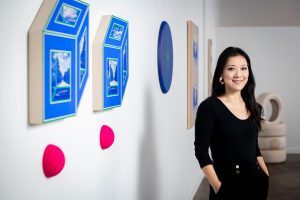 The Gibbes Museum of Art is pleased to announce the finalists for the annual 1858 Prize for Contemporary Southern Art. The 2020 finalists are Namwon Choi, Stephen L. Hayes and Jennifer Shaw. The winner, whose work demonstrates the highest level of artistic achievement while contributing to a new understanding of art in the South, will be presented with a $10,000 cash prize and have one selected piece exhibited in the Gibbes’ Mary Jackson Modern and Contemporary Gallery in 2021.

“The 1858 prize exemplifies artists at the forefront of contemporary southern art, and this year’s three finalists were chosen out of an outstanding group of over 200 candidates,” says Angela Mack, executive director at the Gibbes Museum of Art. “The pandemic had a sudden and substantial impact on artists, which is why Society 1858 and the Gibbes believe it is so important to continue supporting them with programs like the 1858 Prize for Contemporary Southern Art.”

This year’s winner will be announced at the beginning of December and celebrated at the Amy P. Coy Forum and Reception hosted by Society 1858 at the Gibbes on Friday, February 5, 2021. The forum will feature a presentation by the winning artist, followed by a reception.

Namwon Choi is an artist and educator based in Savannah, Ga. Choi has a Master of Fine Arts in drawing and painting from Georgia State University and a Master of Fine Arts in oriental painting from Hongik University of Seoul, Korea. Since her move to the U.S., Choi’s life in-between two countries, embodying affiliation and alienation, has been the inspiration of her art. Her interest in the spatial and temporal condition of in-betweenness led her to view the highway as the space of transience that (dis)connects one place to another. She creates drawings and paintings of highways on canvas paper and uses tires as a means of portraying her life in transition. She has been an artist in residence at Virginia Center for the Creative Arts, Hambidge and the Massachusetts Museum of Contemporary Art studio. Her most recent solo exhibitions were at the Artist Homes Gallery in Berlin and Stanely Beaman & Sears Gallery in Atlanta. Currently, she is a professor of foundation studies at Savannah College of Art and Design.

Stephen L. Hayes Jr. creates masterpieces—woodcuts, sculptures, installations small and large—from found materials that draw on social and economic themes ingrained in the history of the U.S. and African Americans. His approach is simple: “If I can’t find it, I’ll make it. If I cannot make it, I’ll find it.” He went to North Carolina Central University, aiming to transfer to North Carolina State University to study mechanical engineering. Instead, through a friend, he discovered graphic design. His newfound major led to a ceramics course, where his enthusiasm and skill granted him unlimited access to the pottery wheel. He threw enough pots to develop a strong portfolio, earning him a residency at the acclaimed New York State College of Ceramics at Alfred University. Hayes received a Master of Fine Arts in sculpture from Savannah College of Art and Design in Atlanta. His thesis exhibition, “Cash Crop,” has been traveling and exhibiting for nearly a decade. Frequently in his work, Hayes uses three symbols: a pawn, corn and a horse to explore America’s use (or misuse) of black bodies, black minds and black labor. Artists, he believes, are as much translators as they are creators.

Jennifer Shaw is a fine art photographer whose work is based on both a world observed, and a world constructed, often focusing on the fleeting and personal within the sphere of her immediate surroundings. She grew up in Milwaukee, Wisconsin and earned a Bachelor of Fine Arts in photography at the Rhode Island School of Design. Upon graduation, she moved to New Orleans in pursuit of the artist’s life, where she currently teaches the disappearing art of darkroom photography at the Louise S. McGehee School. Shaw’s photographs have been featured in B&W, American Photo, Shots, Light Leaks, The Sun and Oxford American magazines, and online publications including NPR, Fraction Magazine, Lenscratch and One, One Thousand. Her first monograph, “Hurricane Story” (Chin Music Press), was named best photo book of 2011 by Photo-Eye and Brain Pickings. North Light Press published her second monograph, “Nature/Nurture,” in 2012. Shaw’s work is exhibited widely and held in various museum collections, including the New Orleans Museum of Art, the Ogden Museum of Southern Art and the Museum of Fine Arts Houston.

Follow us
Related Topics:1858 Prize for Contemporary Southern Artgibbes museum of artSociety 1858
Up Next