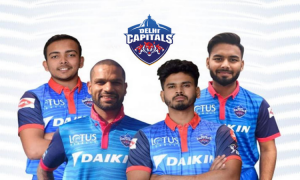 Lucky for us we still have the IPL entertainment despite the ongoing COVID-19 pandemic. IPL 2020 is fast moving towards the last of the league matches round, and all the teams are trying hard to book a slot in the top four positions. Online betting on IPL matches is in full swing, and punters are eager to make the most from the remaining games. Bookmarks are tantalizing gamblers by providing match predictions, daily match tips, and team profiles to help them make a rewarding bet. Here is a complete profile of one of the high–rated and very potential IPL team – Delhi Capitals – to help you decide your bet on the team and its other markets.

The Delhi Capitals, known as The Delhi Daredevils at that time, was one of the eight teams which were part of the inaugural IPL season 1 in 2008. Famously tagged as the “Double Ds” by the commentator Danny Morrison, the team has come a long way since then. The GMR group begged the franchise Delhi Daredevils at the inception of the cash-rich league.

The initial seasons of IPL

The team fared well in the initial two seasons reaching the playoffs (then semifinals) in both years. They were table-toppers at the end of the league stage in 2009. Throughout its tipsy-topsy journey of twelve years, the franchise changed players, captains, and even the support staff but could not change its dismal run in the IPL. The Delhi side for the first three seasons contained most of the players who are the legends of the game, like Virender Sehwag, Gautam Gambhir, Mahela Jayawardene, Shikar Dhawan, David Warner, AB de Villiers, Glenn McGrath, Yuvraj Singh, and the list continues.

The Delhi Daredevils have a strange record to its name. Since the league’s occurrence in 2008, they have finished the league stage at all positions ranging from 1 to 8. Delhi never had a weak team, to be honest. Their weakest squad “on paper” is the one that has qualified for two seasons straight. Amit Mishra, the second-highest wicket-taker in the history of the league, has been one of the team’s pillars and continues to be one until he got injured and was out of the 2020 edition.

In 2018, JSW supposedly bought a majority stack in exchange for the primary sponsorship of the team. Hence, DD had new owners and a new name – “Delhi Capitals (DC).” Their fortunes changed after the name change. DC has managed to qualify for the playoffs in both the seasons to follow. DC managed to be eligible for the playoffs with lesser-known names compared to the other three teams viz. MI, CSK, and SRH. Led by young Shreyas Iyer, who was handed captaincy midway through the 2018 season by Gautam Gambhir, DC stunned everyone with their performance. In the absence of veterans, the relatively young side of IPL showed excellent calibre.

In the wake of their excellent performance in 2019, this season of IPL sees very bright prospects for the Capitals’ betting markets. The team has a well-balanced look with a refreshing combination of experienced and youth talent, surprise fans and punters alike. They have the best fast bowler in Kagiso Rabada, who is next only to the likes of Jasprit Bumrah and Jofra Archer. The team has an excellent core of Indian Players, namely, Prithvi Shaw, Shikhar Dhawan, Ajinkya Rahane, Shreyas Iyer, and the X-factors Rishab Pant and Shimron Hetmyer. When it comes to bowling, they have the dependable Ashwin to go along with Rabada and Anrich Nortje, the latest addition to their squad. The team also has very economical Axar Patel and all-rounders like Marcus Stoinis and Harshal Patel to provide the much-needed balance and stability. With a number 2 finish in the still ongoing tournament, DC is a team to reckon with in times to come.

Delhi Capitals is proving to be the real dark horse of IPL 2020, with luck shining brightly in its favours. Betting on this team and its other markets can be a good and rewarding bargain. If you think of putting your stake in Delhi Capitals in IPL 2020, do not think twice. The team has the potential to emerge a winner and lift the trophy if the players play to their full potential.