The Charleston Battery on Tuesday announced the formation of a strategic partnership with Scottish top-division club Hibernian FC of Edinburgh. The Battery say the partnership will provide “collaboration between both clubs on matters including player development, scouting efforts, operational efficiency, and community engagement.” 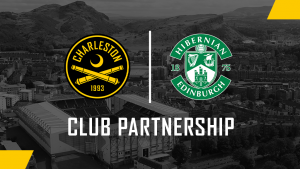 “It’s an exciting day for the Charleston Battery,” said co-owner Brandon Lieb. “To be able to partner with such an historic club like Hibernian FC is truly special. We have been looking at opportunities across Europe, including the Scottish Premiership, and believe that Hibernian FC is an ideal partner. Our two clubs share many of the same values and beliefs. This is an opportunity for us to collaborate and evolve our clubs through an innovative, transatlantic partnership.”

“We are delighted and excited by this partnership,” Ronald J Gordon, major shareholder and Executive Chairman at Hibernian FC, said. “It brings together two clubs with shared values on and off the pitch, in a way that will help us both to achieve our aspirations. Looking at ways we can work together, be smarter, expand our networks and learn from each other is only going to be a good thing.”

The player development component of the partnership will provide select Battery players the opportunity to train with the Scottish club in Edinburgh. Defender Leland Archer and midfielder Robbie Crawford kick off the player exchange as the two have already traveled to Edinburgh. The players will begin training with Hibernian FC in mid November and gain valuable experience in a top-tier European professional league during the Battery’s offseason.

Likewise, Hibernian players will have the opportunity to train in Charleston with the Battery.

“It provides a stepping stone for our players who have potential to perform at some of the highest levels of European soccer,” Battery COO Mike Kelleher said. “And to welcome players from Hibernian to share their expertise and train with our players here in Charleston, we couldn’t ask for a better partner to expand our international scouting network. From a professional standpoint, it provides a pathway for players on both sides to grow immensely.”

“Full credit goes to our Technical Scout, Ian Gordon, who has worked very hard to deliver this partnership,” Hibernian FC Sporting Director Graeme Mathie said. “The link with Charleston Battery allows us to tap in to their network and resources as we look to expand our scouting activities into new markets, and we are already looking forward to welcoming two of their current squad to the Hibernian Training Centre in the coming weeks for an extended training period, with the potential for two of our young players to travel there early next year.”

Established in 1875, Hibernian FC are a leading club in Scotland’s national sport, situated in Edinburgh, Scotland’s capital city. The historic club was the first ever club to play in European competition and the first British club to introduce shirt sponsorship. Hibernian’s stage is Easter Road, a 20,421 capacity all seater stadium, entertaining a home fan average attendance of 94%. Hibernian Football Club has won all of the major domestic titles, most recently winning the League Cup in 2007 and the Scottish Cup in 2016.

Comedy Comes to Daniel Island with the “Laugh Until 2020 Is Gone!” Series