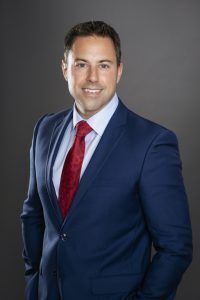 Matthew vandenBerg (right), vice president for advancement and external relations at Alma College (Alma, Mich.), has been selected as the nineteenth president of Presbyterian College.

During his tenure at Alma College, vandenBerg has led the five most productive fundraising years in the college’s history. Alma College averaged raising $17 million a year since vandenBerg arrived in 2015.

vandenBerg was selected by PC’s Board of Trustees on Oct. 28. He will succeed Bob Staton on February 1. In May, Staton announced that he will retire on Dec. 31, 2020 after five years as president of the College.

“He sought a presidency at a church-related liberal arts college, and specifically PC, as our mission of developing well-rounded students is a driving force for him,” Lassiter said.

“With the many challenges facing higher education, Dr. vandenBerg brings a sense of urgency, initiative, and drive that is going to be needed to address and navigate the changes facing PC over the next decade. He has a personality that will make others want to join with him in that effort.”

vandenBerg’s selection follows a national search that began in May. More than 100 individuals representing all major institutional sectors applied to become the next president of PC. Applicants including sitting presidents vied for the opportunity to lead PC, which Money magazine lists as the highest-ranked private institution in South Carolina in its “Best Colleges in America, Ranked by Value” and the U.S. News and World Report ranks as one of the nation’s best liberal arts colleges for advancing social mobility.

“My primary concern as chair of the search committee,” said Dr. Holbrook Raynal ’70, “was to find the person who has working knowledge and sufficient grasp of all of the challenges facing higher education and has the ability to communicate and lead strategies that will address those that are most urgent for Presbyterian College.

“That person would need to be able to develop and nurture effective relationships with all of the constituencies that make up the PC family. High on the list of priorities were student enrollment, fundraising, shared governance within the institution, and emphasis on diversity and inclusion.

“Drawing on his experience and inspiring leadership style, Dr. vandenBerg demonstrates the ability and desire to quickly address those concerns.”

“I am deeply grateful to Board Chair E. G. Lassiter, Search Committee Chair Holbrook Raynal, the Board of Trustees, and the Search Committee for their confidence and trust in me,” vandenBerg said.

“I was impressed by the thoughtfulness, diligence, and care taken by PC at each stage in the search process and overwhelmed by the extraordinary lengths taken by so many to make my family and me feel welcome.

“PC is a venerable institution with rich traditions, a long track record of preparing students for meaningful and successful lives, and a remarkably passionate and loyal alumni base. I will bring sensitivity and humility to the role and a voracious appetite for learning about all the things that make PC so special.

“My top priorities from the outset will be to build strong relationships, to listen and learn with care, and to earn trust, one person at a time.”

Before his tenure at Alma College, vandenBerg served as associate vice president for development at Albion College (Albion, Mich.) and positioned the school to launch a $100 million campaign. vandenBerg oversaw an annual fund of a record $2.5 million while at the school.

As assistant dean for development and alumni relations at the Indiana University School of Informatics and Computing, vandenBerg helped launch the university’s $3 billion Bicentennial Campaign.

While at Alma College, vandenBerg oversaw the design and launch of a trendsetting constituent engagement initiative known as the Alma Ambassador Program®. The program recruits volunteers (i.e. “Ambassadors”) to assist the school in numerous areas, including admissions, student retention, and career services activities.

The program is responsible for increasing the number of student referrals over the past five years. Before the initiative, fewer than 50 prospective students per year were referred to Alma College by alumni or other individuals. The number of referrals increased to 978 during the first year of the initiative in 2016. Since then, the number of student referrals has steadily increased to 1,200 in 2017, to 1,300 in 2018, and to more than 1,400 in 2019 and 2020. Approximately 80% of students in the 2020-2021 entering class received referrals. The Council for Advancement and Support of Education (CASE) recognized the initiative with 13 awards, including its 2019 International Circle of Excellence Award and 2019 Platinum Award for Best Practices in Alumni Relations.

During his time at Alma, vandenBerg has played a leadership role in developing curricular and co-curricular offerings. In preparation for the college’s strategic planning process, he chaired a diverse group of faculty and staff charged with inventorying Alma’s existing strengths and crafting strategies to leverage those assets to differentiate the college from competitors. The group’s efforts set the stage for the emergence of signature interdisciplinary institutes tied to key institutional strengths. vandenBerg is playing a key role in developing and implementing several of those initiatives, which include a new online continuing education program.

He has also been an ardent champion of diversity, equity and inclusion efforts. While at Centenary College (now Centenary University in Hackettstown, NJ), he led efforts to support and retain its international student population. More recently, he helped lead Alma College in undertaking an independent assessment of its campus climate related to diversity, equity and inclusion.

vandenBerg looks forward to continuing such efforts at PC, which attracted and enrolled an increasingly diverse set of new undergraduates in 2018, 2019, and 2020.

“Dr. vandenBerg brings a track record of success as well as an energy and dynamism that I believe will serve PC well,” said Dr. Michael Nelson, PC history professor, presidential search committee member, and chair of PC’s Faculty Senate. “In this challenging and changing time for higher education, his experience working at similar institutions and his openness to innovative ideas is exciting and promises a bright future.

“I anticipate that faculty and the president will work together to continue improving the academic experience at PC.”

Prior to his time in higher education, vandenBerg served as the assistant vice president at CCS Fund Raising, a leading fundraising management firm. He also served as a foreign policy and national defense adviser and a spokesperson for the Chairman of the Permanent Select Committee on Intelligence at the U.S. House of Representatives.

vandenBerg’s work has been published in Insider Higher Education and other publications. His article, “Alma’s City-College relationship is not unique, but it could be,” encouraged city leaders and the college to work together on a then-$5M (ultimately $6.5M) economic development project to refurbish an historic opera house in the downtown. The article was picked up in newspapers around Michigan.

vandenBerg’s numerous presentations and public speaking engagements include covering “Creating a Culture of Philanthropy” as the featured speaker at a recent Association of Fundraising Professionals conference. vandenBerg was also the keynote speaker at a National Parent Fundraisers Conference and has presented at other higher education conferences.

vandenBerg and his wife, Melissa, recently celebrated their ninth wedding anniversary and have two children, Jackson (8) and Sylvia (4), as well as a golden retriever named Honey. Both lifelong Presbyterians (PCUSA), Matt and Melissa were married just blocks from where they met, at New York Avenue Presbyterian Church in Washington, D.C.

Following several years as a pre-kindergarten teacher, Melissa is a stay-at-home mom who enjoys reading, gardening, hiking, and volunteering with Meals on Wheels. She earned her Bachelor of Arts in English from The George Washington University. Matt and Melissa relish time together as a family and enjoy taking their children on outdoor adventures.  All five members of the vandenBerg Family are excited about fully and actively engaging in the life of the campus.

“Melissa and I almost instantly felt at home upon arriving on campus,” Matt said. “We are eager to begin this exciting new calling and to embrace the PC community.”