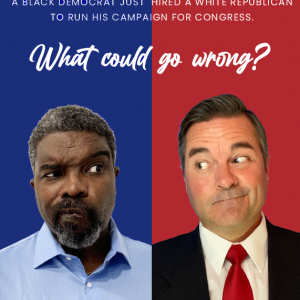 A new political dramedy webseries, ​Right in the Left Lane​, ​is set to be released in November and offers a fresh – and funny – take on racial issues in South Carolina politics. This innovative and topical new series was created, written, and developed in South Carolina, and highlights local talent.

​Kevin Schumacher​, a Columbia entrepreneur, and ​Darion McCloud​, a leader in the Columbia acting community, are the first-time creators behind this series. ​Right in the Left Lane​ ​creatively harnesses the Zoom meeting format to reflect our current political and lived reality while also pioneering new creative filming methods, creating a high-definition series while prioritizing the health and safety of the cast and crew.

Right in the Left Lane​ is a 5-part web series chronicling the ups and downs of a fictional political campaign in South Carolina. ​Darius Lane​, a charismatic Black Democratic congressional candidate, agrees to bring on ​Bubba Lane,​ his former Citadel roommate and Republican state chair, as his political strategist. Can this team come together or will their opposing philosophies pull them apart?

Kevin Schumacher​ and ​Darion McCloud ​are the co-creators of this web series, and draw upon their own experiences of South Carolina culture and politics. ​Schumacher​ has had a varied career as an entrepreneur, community leader, and now as a film producer with his new business, ​The Smallest Deed Films​. This project grew out of his own experiences as the father to an African-American son. Lead actor and co-creator​ McCloud​ is the co-founder and creative director of ​The NiA Company​, the former President of the​ Friends of African American Art and Culture affiliate with Columbia Museum of Art, and the winner of various awards for his work in theatre and as a community leader.

The eclectic writing team behind this project also includes SC writers ​Christina Xan, Perry Simpson​, and ​Lou Clyde​. ​Xan​ is a published poet, playwright, PhD candidate, and Adjunct Professor of English at the University of South Carolina, whose play​ “Glass”​ was turned into a short film that premiered and toured SC festivals in 2017.​ Simpson​ is an actor, writer, and director based in South Carolina. Buffalo transplant ​Clyde​ is an experienced writer whose full-length comedy ​”Pouf!” ​was recently selected for the 2020 ​SheNYC Summer Theatre festival​.

For more information, visit their crowdfunding page, and follow the show on social media for the latest updates.
–